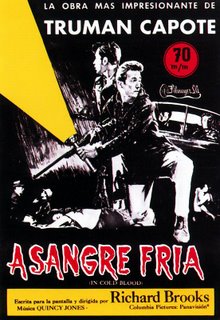 Its a pretty disturbing film when you realize that the character played by Phillip Seymour Hoffman is far from the vampire Truman Capote was in real life. Perry Smith confessed to the murders before he told Capote, unlike the version in the latest theatrical realize. Its doubtful that Truman assisted in stays of execution as the film intimates, but like the film used his money and influence to play with the courts and penal institutions to his whim and fancy. Amazing that a celebrity could have such disregard for human life and buy his way through. He lived a good twenty years after he wrote In Cold Blood and died of alcoholism. From the film its clear that the disease had taken its toll early on.

There is something indeed disturbing about the gay and lesbian characters in Capote. For one thing, thing they never have sex. Its the most sexless movie that has ever been made. The director pumps up the eroticism between Perry and Truman, and is content having Truman's boring lover dismiss Harper Lee as "masculine". She also never has sex. Though Seymour Hoffman does a great job of portraying a caricature of the real life very stereotypical gay Capote, we learn that the title of his book could just as well apply to the way he got his story.

What does In Cold Blood (1967) have to say about Capote? Time to watch Robert Blake, the man who shot his wife have a go at Perry Smith.
Posted by Moira Jean Sullivan