Jane Fonda back in Stockholm

Jane Fonda was in Stockholm during the antiwar demonstrations against the Vietnam war in the early 1970's. Then in 1989 to promote the film Old Gringo. On March 18-22 she came again to promote her book, My Life So Far, and to introduce a retrospective of her films at the Swedish Film Institute Cinemateque. She marvelled at how Swedish films are paid for by a percentage of the box office, and enthusiastically presented On Golden Pond, the last film her father Henry Fonda made. She starred as his daughter, and recalled some of the problematic issues of their relationship on screen. Katherine Hepburn played Jane's mother who tried to smooth the way between them, both offscreen and onscreen. Both Henry and Katherine won Oscars for their roles and Fonda recalled how Katherine remarked, " you'll never catch me now!"
A huge crowd of primarily middle aged women filled the Stockholm Kulturhuset to hear Jane Fonda speak about her life and reveal anecdotes that are found in her best selling book, translated into Swedish. The actress was interviewed by Stina Dabrowski, who had visited Fonda in her apartment in Atlanta a few weeks before. Dabrowski chose to ask questions about Fonda's personal life, who is more than willing that people know the intimate details of failed marriages and her own recovery from bulimia and alcoholism. Dabrowski was also asked by Fonda about her own failed marriage, which she declined to discuss.
The ultra-professional actor revealed earlier at a press conference that she isn't asked to star in so many movies, relating factors of modern day Hollywood production with huge budgets and so much tied into marketing and the demands for instant box office success. Fonda recalled how young actors were given a chance to have their films find a market. But Fonda is certainly in top form in her third act. Should she come to the attention of a European director she wouldn't mind it. Charlotte Rampling, Jane Birkin, Catherine Deneuve and Jeanne Moreau still work, and Jane is fluent in French. But one French director she would never work again with is Jean Luc Godard. She regarded his "generically political" film, made by a Maoist", Tout Va Bien as horrible. Although she enjoyed working with Yves Montand, and highly regarded Jean Seberg's work with Godard, she realized he was using her for his own agenda. When she tried to back out, his "henchman" Gorin physically threatened her. Godard's write off was Letter to Jane, a film she "doesn't have a clue about " as far as what he wanted to say.

Fonda enjoyed her success in Monster in Law, which she calls a 'popcorn movie', and wouldn't mind a sequel. But she doesn't have the time to produce it, so someone else will have to. 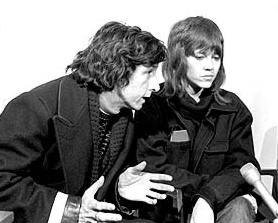 Regarding her relationship to Sweden she recalled how she came to strategize with antiwar demonstrators in Stockholm in the 1970s. She was proud of the country and the late Olof Palme. Since her visit in 1989 she says revealed that she is feeling much better as "a whole person". Mary Hershberger's Jane Fonda’s War: A Political Biography of an Anti-war Icon illuminates Fonda's work with antiwar resisters during the very unpopular war. The study reveals how Fonda through Nixon propaganda was used as a scapegoat to chastize the antiwar movement. On a personal scale, in My Life So Far , Fonda revealed how antiwar activist Tom Hayden belittled her achievements which ultimately let to their divorce.

Fonda admitted to having a low profile regarding the Iraq war and said there were others out there now to do the job. Her choice of best film at the Academy Awards was Syriana, a film that was not nominated, though George Clooney won best supporting actor, and she loves his work.

Two young Stockholm sci-fi enthusiasts, Erik Dalen and Helena Sterner dressed as Barbarella and Pygar came to the book signing dressed up straight from the cult science fiction film directed by Fonda's ex husband, the late Roger Vadim. An astonished Jane exclaimed, but "they didn't have piercings back then", when she noted the adorned chest of the Swedish Pygar. As true
Barbarellian aficionados, Erik and Helena were well versed in the intricacies of the film. Such as the remarks of "The Great Tyrant"(Brian Jones real life girlfriend Anita Pallenberg) to Barbarella - "Hello Pretty Pretty"? "I didn't like those biting dolls," revealed Helena. "Did you know that the pop group Duran - Duran was named for the film?" "Of course", replied Erik.
Jane revealed her fantasy of a 21st century Barbarella in neutral Sweden, which she called "liberated territory", acclaiming her peace making mission, then as now.