The "Bond Girls" in SKYFALL

'Skyfall', which opens November 9 in San Francisco injects new blood into the 50-year James Bond cinema experience. Ever since the magnificent and audacious Judi Dench debuted as head of Her Majesty's Secret Service, James Bond has been in need of a makeover.  Dench's M refers to James Bond as a “misogynist dinosaur” and “relic of the Cold War” (Pierce Brosnan’s Bond in 'GoldenEye') and in 'Skyfall' this scrutiny continues.

“Orphaned children make the best agents”, says M, and she is as close to being the mother Bond never had than anyone.

In the opening scene of 'Skyfall', James Bond is in hot pursuit of a French rogue named Patrice, an assassin who works for a master hacker who constructs remote controlled time-bombs. The assassination of M is one of the targets for destruction and Patrice carries the microchip with the names of the others.

Patrice, played by Swedish actor Ola Rapace is the former husband of Noomi Rapace ('The Girl with the Dragon Tattoo') and both actors were promoted for the films by Swedish casting agent Tusse Lande. The Scandinavian influence in James Bond films is historic. Swedish actors have played Bond girls (Britt Eklund, Izabella Scorupco and Maud Adams) and two Danish actors play villains in 'Casino Royale' (Mads Mikkelsen and Jesper Christensen) and 'Quantum of Solace' (Christensen).

The main villain in 'Skyfall', Raoul Silva, is played by Javier Bardem, a former "00 agent" whom M found expedient, as she seems to have done with Bond by allowing an M16 agent to take aim while he struggles with Patrice on a moving train. When Bond and Silva finally meet, he brings up their mutual betrayal and asks Bond if it might be uncomfortable if he had to be touched by a man in the line of duty. “What makes you think I haven’t", retorts Craig in a real update for this “Cold War relic”.
It is not only M who finds Bond ancient, Bond thinks the same, for he challenges the wisdom of the younger equivalent of Q (played by the adorable Ben Whishaw) because of the “spots” on his face. This Q does not instruct about gadgets such as the special pens and watches used by previous Bonds. Instead his expertise is in computers with huge monitors, which should appeal to the under 30 crowd the Bond franchise is hoping to attract. Bond is clearly reinvented in each installment of their 50 year old history.

In this film, we eventually travel to James Bond’s family home, Skyfall, located in Scotland. His parents died in an accident while the young James hid in a secret pathway ("priest hole")  under their house. Albert Finney plays Kincade, the gamekeeper of the Skyfall manor. Casting thoughts went to Sean Connery for this role, which director Sam Mendes considered, but it would have been a nostalgic choice. Sir Sean Connery would probably have turned it down anyway. At any rate Bond's (Connery) Aston Martin is unearthed that debuted in 'GoldFinger' (1963), an artifact from the past that proves itself more than useful.

There are many things that make this Bond film one of the best, Daniel Craig, notwithstanding. Though Craig was sought out by Bond producers for quite a while before he said yes to 'Casino Royale', he is truly far from the dark-haired and tall Bond long associated with the character (excluding Roger Moore). Sean Connery and modern Bond Pierce Brosnan were the best archetypes. Craig already shows signs of aging: a gray beard stubble and a haggard, chiseled face.

After the shooting incident with Patrice, Bond has to prove himself fit for fight and although he doesn’t actually pass the M16 batteries of tests, at least to the unsuspecting public, he makes an excellent display of dastardly agent acumen with vulnerability. This sequence is to Craig’s credit and warms us up to him more than ever, as he is slated to play a few more Bonds.

The casting of Javier Bardem is indeed brilliant and his role as the demented bitter "ex-00" Raoul Silva is delivered with subtle and sarcastic humor, and is as impressive as Christopher Walken’s Max Zorin in 'A View to Kill' (1985).

Less impressive are the Bond girls who have minor roles. Doubling as a minxy M16 agent and in the end as the alluring new Miss Moneypenny is the African-Brit Naomi Harris, the “good Bond girl” in a new twist for Moneypenny.  The morose "bad" Bond girl is Bérénice-Lim Marlone (France/Cambodia), who plays Sévérine, Silva’s 'girlfriend' and 'slave'. Typically the 'binders of women' for nice Bond Girls have been white (21 out of 23) and for bad girls women of color or non-Anglo origin, (15 out of 23) with notable exceptions.

The fact that the 'Skyfall ' Bond women of do not play fully constructed characters with onscreen longevity that leave their mark such as Dianna Rigg (UK) as Teresa in 'Her Majesty's Secret Service' (1976) Barbara Carrera (Nicaragua) as Fatima Blush in 'Never Say Never Again '(1983), Grace Jones (Jamaica) as "May Day" in A View to Kill (1985) and Famke Janssen (Dutch) as Xenia Onatopp in 'GoldenEye' (1995) is a notable flaw of the film.

We have Ralph Fiennes to look forward to in future Bond films who plays Gareth Mallory, a higher up head of foreign intelligence in Her Majesty’s Secret Service. However, there is not much inner charisma or pointed sarcasm to be found here.

'Skyfall' is set in Shanghai with exquisite art direction in the nightclub where Bond meets Sévérine, and in Istanbul and Fethiye, Turkey. Surrey, England is the site for the makeshift Scottish Skyfall estate (with establishing shots in Glencoe, Scotland and Berkshire, England) and many scenes were shot in London. Raoul Silva's hideout was shot on Hashima Island, Japan.

The art design by Chris Lowe ('Quantum of Solace'), especially in Shanghai, is modern and elegant. The cinematography by Roger Deakins (who worked with Mendes on 'Revolutionary Road') is beautifully executed, combined with the seamless editing of Stuart Baird who worked on 'Casino Royale'.

Director Sam Mendes, the mastermind behind 'Skyfall', distinguishes himself by making one of the best Bond films to date. Together with producer Barbara Broccoli, he assembled all the right talent and instructed them in crafting a brilliant film.
James Bond films navigate a time-honored pathway involving a series of challenges that agent 007 skillfully overcomes in exotic places with beautiful women, and in the end a brilliant master villain is caught with a big bang. This is the connaisseur Bond spectator reward and 'Skyfall' delivers on schedule.
'Skyfall' is brilliant gift for the golden anniversary of James Bond films Moira Sullivan, San Francisco - Examiner.com, November 9, 2012 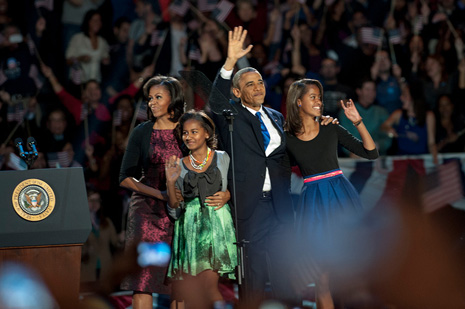 According to Rachel Maddow, these are all the things we are NOT going to have with Obama in the White House, and Thank the People: