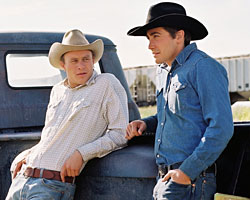 From the beginning Brokeback gained art house cult momentum from its Golden Lion at Venice to its opening in far less theaters than King Kong, but holding its own enough to surpass the Kong box office based on its exhibition availabilities. Now the film has moved into popular culture with auctions, music and advertising--that are not your usual 'tie-ins'.

This is an amazing phenomena to witness. I disagree that it has 'perked up' heterosexual interet in gay relationships. It reveals the extent of a covert homosexual culture forced underground for the prejudices and hate crimes depicted in 1960's middle America but are rampant everywhere today.
Pop Cult Brokeback