Hollywood, A Country for Old Men and Foreigners 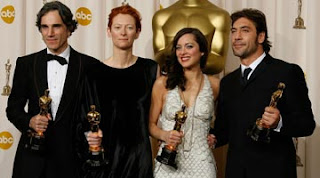 Postscript: Oscars Numero 80
The anticipation is always higher than what the Oscars can deliver. I think Jon Stewart's opening line says it all: "No Country for Old Men, Let There Be Blood, Sweeney Todd, The Demon Barber?
Does Hollywood need a hug? Thank god for teenage pregnancy."
Maybe Hollywood does and maybe it doesn't. But the Oscars might need an audience, and the 80th edition had one of the lowest turnouts ever.
Word is out that at least in the USA viewing was low because not enough Americans were nominated! Looking at the actor categories its pretty awesome to note that the winners are all from outside the JUESSAY. Both Tilda and Marion gave kudos to the men that make them rock: Olivier Dahan and George Clooney and then Javier Bardem thanked his mother and Daniel Day Lewis his girfriend.
Joel Cohen revealed that what they do in No Country for Old Men is no different from their first film, Henry Kissinger on the Move, shot in Super 8. I hope that my Super 8 film on The Underwater Real Estate Twins and a human ashtray will catapult me to Oscar glory. It is really the same, yes it is. Time will tell.
The Oscars could be significantly shortened by taking out the music numbers and stop mentioning "Jack" all the time. As a role model it is unfortunate that he is the leading veteran in the house. Could we say his appearance with Boris Karloff in The Terror (1963) is actually no different from his appearance at the Oscars?
Indeed, Hollywood seems to really be a country for old men, and the men who make the women rock. And the men who decided to put them all in one arm dresses this year. 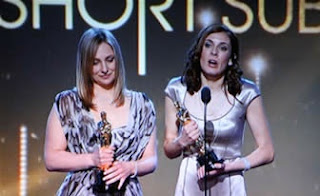 One refreshing addition to this Oscars was the thank you speech by Cynthia Wade, winner of the best short. She directed Freeheld, the true story of the terminally ill Lieutenant Laurel Hester who wanted to leave her pension benefits to her life partner - Stacie.
(PS 35,000 viewers from Sweden watched the ceremony on TV9- 45,000 average in the Red Carpet - acknowledged during the pre-event for sending email- and up from 20,000 viewers last year. Population of Sweden, 9 million.
Posted by cinefemme No comments: Links to this post 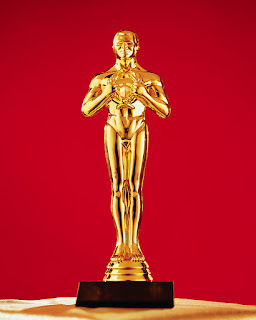 The 80th edition of the Oscars are on TV9 in Stockholm this year and you have to wait until the end of the month to add cable channels. Hello? Timing?
When it comes to services, the bureaucrats of (Sweden) are fashionably late, albeit retro... not a politically incorrect statement; backwards, intentional refusal to update the world ; insistence in living in a cubicle of stubbornness. SO, I MADE the bureaucrats ADD TV9 before March 1! The "cable people". I wonder if they are really the "TV people" from Poltergeist living inside the set behind the war of the ants! Whew! This was hard, but persistence is rewarded, and this approach works! Disarm the bureaucrats before they can say no. Drive close up to their bumper and then ram! But the tailpipe may backfire: "we can't do it because everyone will want it then", or "that is not the way we do things". True customer (dis)service. Just a teenie little cultural idiosyncracy, enough to drive you to drink.

SEEING the Oscars is the name of the game! First hurdle every year, at least in Sweden. The media conglomerates keep channel switching the coverage to different hosts; only IF a Swedish film is nominated will the national channels pony up the money. OK the show is expensive, more expensive then Dallas reruns anyway. (According to Svenska Dagbladet 2008-02-27, 58% of the TV shows in Sweden are from USA, because they are cheaper). The condensed Reader's Digest version of the Oscars is broadcast two days later (subtitles included, and great to understand what Javier Bardem said about his mother!) With a speedy version of the technical and artistic achievement categories. This is really really sad.

I'll never forget the year I saw the Oscars in Paris on Canal + and the commentators talked on top of everyone the entire time, turned down the volume on the speakers so you couldn't even tune them out. Like a football game. But at least in Sweden they DON'T, and when they cut to commercials there is some pretty good analysis by some pretty good film critics. This year it was fashion expert Ellen Kling ( who left after 30 minutes into the show), program leader Pontus Gårdinger AND the popular film critic with the wirey hair, Hans Wiklund.

Best cinematography is a wonderful category at the Oscars that is awarded, the use of the camera and lighting in a film. I think the cinematography in The Diving Bell and the Butterfly is excellent, bright light and soft focus, radiant outdoor shots and just incredible visual style. Hope it wins best cinematography. Director Julien Schnabel did Before Night Falls with Javier Bardem. (According to Maria Schneider, arthouse diva from Last Tango in Paris, Schnabel is one of the few arthouse directors out there). Its the six degrees of Javier this year! Javier Bardem for best supporting actor!--he is a real icon like Hannibal Lector as far as (serial ) murderers go in No Country for Old Men. How else could you describe him? That hairdo just is over the top! We will never forget him! Especially if he wins. I can bet you someone wears a Sugar Wig tonite!
I hope Atonement doesn't win anything! Actually I don't really care how a film compares to a book. It shouldn't even be considered. A film is a film, and a book is a book. Please just keep it separate. Usually book ideas don't make great films because film is not literary, its visual, so if people are SO disappointed go back and read the book. Film owes you nothing. Just your story for inspiration, that is all.

Haven't seen Juno, yet, or There Will be Blood, or Michael Clayton. But I would not be unhappy if No Country for Old Men won best picture, supporting actor and director. (and it did!)
Thought Viggo Mortensen was great in Eastern Promises, I loved that film! The great auteur David Cronenberg made it! What can that guy NOT do, and how versatile!
I am partial to Johnny Depp in Sweeney Todd as best actor , a real ST fan I am! We have the advantage of the musical tradition in the USA which Sweden does not. Hard to sell this film perhaps because it is such a great musical, and well, then a musical is a musical, and a film is a film.

Torn between Julie Christie for Away From Her, a compassionate and moving film directed by Sarah Polley , a young director with such a sensitivity for the elderly, and Marion Cotillard as Edith Piaf for La Môme - for best actress. Love them both. Olivier Dahan, the director of La Môme, was invited for the San Francisco International Film Festival, closing film 2007- and was a bit obnoxious, but I think he had stage fright. That is a real oxymoron.

TORN between Persepolis and Ratatouile for best animated film. Tight race! Both are brilliant. Ratatouille will probably win, its so Americano/Francophilo.
Have not seen I'm Not There yet oj oj oj but hear Cate Blanchett is good as Bob Dylan (she is currently in overuse syndrome), and Heath Ledger (really sorry to see you go) but NOT Richard Gere. Oh Please!
Phillip Seymour Hoffman is a great actor but like Cate is overused in almost everything. I loved him in Capote. He could have retired after that one.

I will attempt to be glued to the set tonite, but will probably fall asleep unfortunately and wake up when the credits roll and the war of the ants begins. Its on here at 2.30am. No way around that. "Aphrodite, crowned in gold, please let this piece of luck of mine".
After the writers strike everyone will be out in droves. Hair, makeup, and tacky American ball room dresses. (Red Carpet on TV9 at midnite) I can't wait till Cannes for some real designs. Have to look at the tuxes then, usually a lot better. Alas, not sure if its a great Oscar year. But then don't we say that every year?
And what about that writer's strike? Seems like missing the Red Carpet at the Golden Globes was a fate worse than death. What Solidaritet! Could have missed the Oscars actually. Still haven't wrapped my head around the issues that need to be clarified once and for all.

As for Sicko half good, half bad. That is BEFORE Michael Moore makes his patronizing Disneyland switch to document health care in Cuba and Europe. It really fell apart after the USA report, which was great- intelligent, with the hard cold facts. Ironically, in Sweden health care is starting to become privatized!

Happy Oscars to you! Drop me a line during the show if you can any of you cinephiles!

This movie never won an Oscar, but like Ghostbusters, you can see it over and over and over and never get sick of it.
Hint: it was inspired by The Birds.
Posted by cinefemme No comments: Links to this post