Jodie Foster is Back! 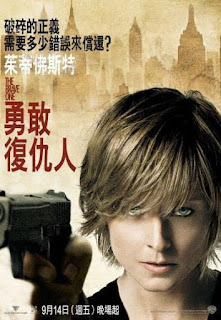 The Brave One directed by Neil Jordan stars Jodie Foster and its her best performance since Silence of the Lambs, 15 years ago. Truly this film puts her out there again, conjuring up memories of the tough girl in Taxi Driver who walks the streets of New York as a precocious preteen. Only this time she is cleaning up the streets of New York, instead of Robert De Niro's "You talking to me?"- Well she doesn’t say that exactly. But when a pimp calls her a Super -"Expletive", she lets him know that he has just met his own private hell.

Erika Bain and her boyfriend Naveen Andrews played by David Kirmani --- take their dog for a walk in the park at night. What’s the harm? There are people sitting on park benches. Well, three street thugs decide to take their dog, brutally assaulting Erika and beating her boyfriend to death. As they assault the young couple the men film the attack. Erika wakes up in intensive care after spending weeks in a coma, thereby missing the funeral of her boyfriend. She works as a radio correspondent and she does a “different” kind of show—socially relevant programs. Her special reports bring her to the attention of Detective Mercer (Terence Howard) who remembers her assault and who is investigating a parallel murder. Erika suffers post-traumatic stress disorder and takes pills for her nerves. But one day she decides she can’t live in fear. And she decides she can’t wait 30 days to get a handgun. She needs it now and badly and in a serious of random crimes she personally observes, she is let into an existence as a vigilante.

The Brave One is a female revenge vehicle and no one is more qualified than Foster. She been pimped out in Taxi Driver, sexually assaulted in The Accused , set up to weasel out information from Hannibal Lector in Silence of the Lambs and go mano e mano with a serial murderer. But after all that, it all gets kind of tame for Foster in pictures. She’s in a western with Richard Geer and a period piece in Siam, but starts up her own production company.

Then the engines seem to roar again with the kind of visceral raw toughness that Foster has in spades. One project is with Mathieu Kassovitz to present La Haine (Hatred) about gang violence in the Parisian suburbs with yet another reference to Travis Bickle and Taxi Driver; she’s locked in a safe house in Panic Room; her daughter is abducted in Flight Plan. The woman has had it all happen to her. It’s all about defending her integrity and her right to be safe. The message of this film comes from post 9/11 New York, and it’s a grim tale about payback and justice. Erika manages to elude the police and everything thinks she’s a guy, but soon the picture starts to flesh itself out.

Death comes unexpectedly and leaves a hole in her heart. Erika needs to reinvent herself she has become another person shaken by senseless violence. Her vengeance becomes a way out and the message is not pretty.

Neil Jordan has directed The Crying Game and Interview with a Vampire. He is fascinated with American violence, as many Europeans who live in relatively safe ethnically homogenous cultures with social welfare programs seem to be. It’s a fascinating subject for the movies, and New York violence is easy to sell. The style for The Brave One is over the top: Both the camerawork and editing convey the confusion and disorder of chaos. Sarah McLaughlin is not a good choice to deliver the film theme, but the song does make it into a love story and tempers the violence. Ironically the Dixie Chicks come up in the film as being too tame for this city. But certainly not Jodie Foster.

Go to "Listening Room" started September 22, 2007 at Movie Magazine International for a broadcast based on this review.
Posted by Moira Jean Sullivan No comments: