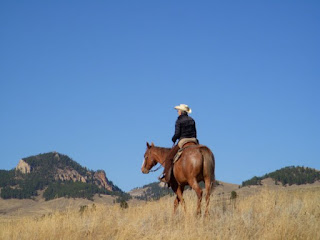 You could say that Barbara Hammer has usually been involved in some kind of corporeal cinema, in one way or another. Her early films on lesbians go where no other filmmaker dared to go in exploring sexuality. Not only among the young and beautiful but the aging. She has successfully used found footage in her films, to bring to public attention old films about lesbian sexuality and presented to us closeted lesbian histories. She has used x-ray photography to show us the insides, and now the outsides in her latest film presented for the first audience ever at the Frameline LGBT Film Festival in San Francisco, A Horse is not a Metaphor. Intriguing title. I would actually say that for this film, a horse is a metaphor. But maybe that is an implied intention. Barbara is probably one of the most provocative and youthful directors anywhere. The film uses old rodeo footage, with young cowgirls wrestling with the cattle, as she so clearly seems to do when presented with her diagnosis of uterine cancer. There is also lots of footage of Barbara on a horse, and one horse in particular with eye and groin cancer, who after a sturdy diet begins to recover. This film is about Barbara's bout with cancer, which she successfully battled and is in over 18 month's remission. But it is also about reclaiming power, and the images of horses, shiny and sleek, with life running through their magnificent bodies evokes this. It takes courage and conviction to bring a film so personal and intimate to the screen. We see Barbara in the hospital, Barbara with short hair after chemotherapy, Barbara's scar from surgery, Barbara naked walking through the forest. Powerful Barbara Hammer who is not afraid to have us look, empathize and learn. That gives us life on life's terms.

Of all the films at Frameline, an evening with experimental work is a night to remember. From a woman who learned how to make movies at San Francisco State. 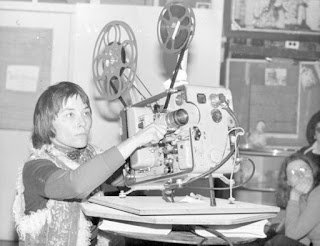 And when she went to school she saw the films of only one woman: Maya Deren: the filmmaker that chose to make experimental, personal films.
Its time to wash away the made for TV scripts, the lesbian love that is unrequited, and the women who kills themselves because they can not have the one they love. There were several films this year at Frameline. Are we learning yet? Are these retrograde themes harking back to Sandy Dennis being felled by a tree in The Fox or Susannah York being forced to eat Beril Reid's cigar in The Killing of Sister George a metaphor for something that is happening to lesbian identity today? Even if so, Barbara makes us remember that its beautiful to be a lesbian at any age, and that the experimental format is a powerful tool of expression.
Here is a film that uses metaphor, to show an incredible joy for life despite a life threatening experience at the risk of alienating the public. "How has this film been received?", asked someone in the audience. "I don't know, you are the first audience", answered Barbara. As one of the first spectators I can only ask, what would the world be without Barbara Hammer? She has brought to lesbian filmmaking a uniqueness, a passion, a daring challenge to see and experience, sit and squirm , feel uncomfortable and provoked, and afterwards feel that you have gone through an ordeal into visionary and auditory realms that have made you richer for the experience. The choice of music by Meredith Monk, another incredible veteran artist , empowered the film and sent it soaring. "I always wanted to ride a horse", says Barbara, who took to the saddle faced with the acknowledgement that life is precious and can be cut short, so you better darn well enjoy all you can.
Posted by Moira Jean Sullivan No comments: