‘Ma, ... how do you really feel about the blacklist? Angry? Frustrated? How?’”

“That needed to be answered, and I thought about it a lot. Angry? No. To me, anger is a futile emotion. I think I can sum it up in two words: deep sorrow. Not for myself – I’ve survived, and my life is full of joy – but a deep sorrow for [my husband] Larry that will be with me in my heart for the rest of my life.”
– Betty Garrett
That's Betty Garrett on the far right, next to her is Gene Kelly, Ester Williams and Frank Sinatra. The film is Take Me Out to the Ball Game

, and Garrett as Shirley Delwyn is hilarious in her pursuit of  Dennis Ryan (Sinatra). Especially when she corners him by singing " It's Fate Baby, It's Fate".
In On the Town (1949) she gets to chase Sinatra again and plays the unforgettable pushy cabby Brunhilde Esterhazy (Hildy) who annoys Gaby (Sinatra) and tries to convince him her place is the only site he needs to see while touring New York. But she gets him in the end.

.
Betty Garrett who died this week (1919-2011) was not only a fine actress but someone with a political conscience. Her husband Larry Parks was called to the House of Un-American activities (HUAC) in 1951 to testify if he knew any Communists in Hollywood.  Parks thought that by telling the truth he would be cleared.  He admitted to being a member of the Communist Party in 1941 but that he got disillusioned with it and quit in 1945. Parks said there was a big difference in being in the Communist Party in 1941 and 1951. This didn't matter to HUAC.  He then pleaded to not have to name names of his colleagues who were in the CP but unlike the "Hollywood Ten," he became an informer.  Even though he was considered a "friendly witness", like Walt Disney,  he was  still blacklisted.  So from the lead role in The Jolson Story in 1946, where he was nominated for best actor  at the Academy Awards, Parks soon found himself playing bit parts in the theater and no studio would sign him in Hollywood. 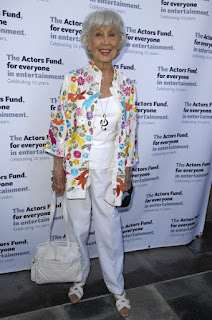 In an interview with Garrett, Monica Sullivan

from Movie Magazine International asks her about this dark period of her life, and a dark chapter for all Americans, the McCarthy period. Garrett said that it was very hard for her and her husband because of the HUAC proceedings. It was common in Hollywood that directors, screenwriters and actors contributed to the Communist Party during the Depression.  Years later, HUAC went after Hollywood because of the fear of making pictures that would threaten national security. But with the larger aim of making money and holding a tight rain on expenses, studio bosses were not interested in promoting "Communism" through film.
Garrett said that realistically speaking, the CP was the only party during the Depression which addressed issues of the poor and disenfranchised.
It worked to establish retirement funds, and labor unions. Garrett and Parks were young and like many other young people of their time wanted change. It was none of anyone's business what political affiliation an American chose to have, said Garrett.  This chapter of her life, and many others are  taken up in her autobiography aptly named Betty Garrett and Other Songs: A Life on Stage and Screen

. In her first film Big City the child actor Margaret O’Brien says to her, “When you sing, you sing all over!” Garrett told Sullivan that she wrote the book because she said she wasn't going to live forever.  For her 90th birthday in 2009, a montage was made of her work. Surely we realize that this wonderful lady of the stage and screen will live forever.


Posted by cinefemme No comments: Links to this post