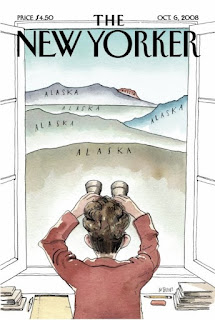 There wouldn't be much point in spotlighting women in the media if a few moments weren't spent on Sarah Palin, much as I dislike having to do it. The woman N.O.W will not endorse, the woman that is a Vice Presidential candidate to a Presidential candidate that will slash all federal spending except to veterans and troops overseas. The woman who said " bet they're sorry now" to the Democrats for NOT choosing a woman, i.e. Hillary Clinton.
This election was so clearly Hillary Clintons' but maybe the goofuses in the Republican party headquarters who couldn't read the signals correctly put just any woman on the ticket. Hillary Clinton was often the brunt of jokes about her gender, and Sarah Palin is no different. But while the arguments leveled by Clinton had foresight, Palin seems to be winging it alone, hit or miss, mostly miss on a variety of topics that makes it clear that any old woman isn't the same as someone who knows what she is doing. A Christian right candidate with a ready made constituency that opposes Roe Wade, evolution and stem cell research is the last thing we need. And if the senior McCain were to pass on, "bet we'll be sorry now".

These positions were expressed by Palin in speeches during the past few years:

By far the biggest blunder is illustrated in the latest edition of The New Yorker: since Russia is within a bird's eye view of Alaska Palin feels she has qualified foreign policy experience. This may only amount to cooperating on trading missions across the border - such as exchanging wild game or whatever but the claim will land her in the Idiot Hall of Fame. Too bad she is a woman. It makes it worse. It may be true that dumb politicians resonate with voters such as George Bush Jr, and maybe its just a ploy to play dumb. But stupid is as stupid does. 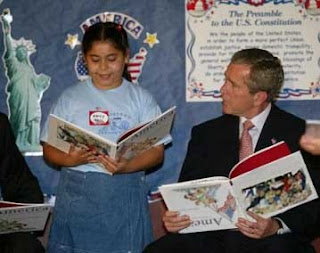 Let's not forget George Jr reading a book upside down at a school for young children, or appearing on camera like a deer in highlights when told about the WTC on September 11th.
There is something remarkably similar about the recent utterances of Sarah Palin. Aren't they enough of a red flag? No wonder Obama wants to target funding for early education.
Katie Couric's soon to be legendary scoop with the "executive of" the state of Alaska reveals a riled up often incoherent and bumbling fool at work.
I sincerely feel for Sarah Palin, I truly do because she is doing the best she can, the best she thinks she can, though she could do far better if she were another person altogether, which she isn't.
Fifteen hundred women in Anchorage Alaska aren't particularly happy with the "executive of" and protested her nomination two hours after it was made, an event nowhere in the media. And remember the woman mysteriously escorted out during the nomination?

Truly women don't vote for a woman just because she is a woman. Are we learning yet? At least Sarah Palin should know something more about politics than being a poor Hillary imitation for Vietnam war veteran John McCain.
Posted by Moira Jean Sullivan No comments: