This is not a film review, no siree bob, its about a theater production written by Marga Gomez. But she has starred in several indie films including, THE D WORD, a spoof on THE L WORD, and so the work of this multi-talented artist is here for you all to appreciate.

Marga Gomez is a household word in San Francisco, and she is back in town, her "creative home" as she puts it. (And MY "mythical home", proclaims CinéFemme!). I managed to catch this über talented performer in Stockholm years ago in a museum built to house the enormous shipwrecked Vasa, which sunk on its maiden voyage in the 16th century. It escapes me what Gomez was up to in Stockholm that year, but the spunk and fire that fuels her performance about oh , 20 years later was in crystalline form. She has only gotten better and better and better, every time I see her.

Just know that in an oppressive political period there are a lot of tight asses. I guess you can say this is the theme of this new piece. There has been an outgrowth of Laura Bush jokes by female comics from Margaret Cho to Sandra Bernhard to Gomez that invite us to explore how Hubby Bush can't possibly be satisfying her and women can do it better. Here, that Condoleezza Rice and the first lady librarian could be a better and kinkier match. So too, Al Gore could have done infinite wonders for the White House, if he hadn't been such a tight ass. Gomez makes that clear.

The story of The Twelve Days of Cochina begins with the upbringing of a young Latino American girl who learns that everything she puts into her mouth is dirty, making no exceptions for consensual sex as she grows older. Lesbian bed death aside, on Xmas eve she learns that her lover has dumped her for someone else. Perhaps that is why they haven't had sex for a long time and her girlfriend is always at work. Cochina goes on a war path which includes a visit to Walgreen's to become the yuletide "discrepancy bitch". She knows the parameters of this archetype having suffered lines of Xmas shoppers in order to overindulge her waylaid exlover. But she learns from the ghost of Xmas past, her auntie, (Theatre Rhinoceros could only afford one Xmas ghost being low budget , Gomez reveals) that she should live more and have more sex. It may seem a little corny but there is some truth to the missing life force of a loveless life. Or a sexless love life.

As time goes on I swear I am listening to Guy Debord's Situationist Manifesto that digs at the commodity tradeoff involved in sexual repression. Even some of his offspring who "demand new sex organs" because the one's we have don't function very well. Maybe that is why there is a sex toy market......or maybe even that is why the Austrian psychiatrist Willhem Reich really went to prison.

One things is for sure, Napoleon Hill seems to be right about handshakes (Think and Grow Rich, 1937). He says they reveal the presence or absence of a vital sexuality and even the potential for success. Most folks aren't really "successful" till they are 50 he proclaimed, and all goes "mano et mano" with mind-body-soul alignment. When will the conservatives ever learn? George never has, and I don't think Laura ever will either. With or without Rice.

Just know that Gomez' timing is sublime all the way through the one hour and forty five minute one woman act. There is subtlety and wild antics and the comedian is a veteran in knowing when to speed up, slow down and stop for parking. Some of the musical numbers require a stronger voice, but Gomez makes no pretense she is a vocalist or musician and doesn't let it rip like Sandra Bernhard. (There is only one lesbian standup world class vocalist I know that could pull it off with the right musicians) You can't have everything not even for Xmas. Like Bernhard, Gomez has a taste for stacking up the cultural icons that belong under the Xmas tree, when you're not having sex and don't have someone who breathlessly rushes at the same speed to snuggle under the mistletoe for a kiss. 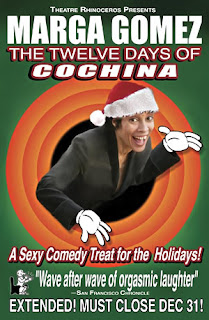 I wish I could do justice to the elastic body of Marga Gomez: Suffice it to say she is in great shape and pulls off physical elocution like a gyroscope at a fun house. If you are a suspicious spectator determined to make her work for a laugh you will find yourself in agreement with the lofty wit of Gomez in roughly the first quarter. Its impossible not to imbibe in her energy and wherever you are on the relationship spectrum there is something for all and for all a good night.

Today would have been the last day of the show, extended through New Year's Eve at Theatre Rhinoceros, San Francisco.