Master Executioner of Sharks and Humans 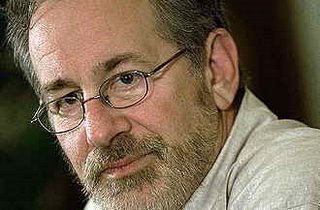 Munich is so incredibly violent that its unbearable to watch. For spice Spielberg throws in a female assassin that is brutally murdered with coolness- simple little bullet holes from a silencer, that are neat and small and then spurt blood, her body left naked. There is seemingly no point at all for this, for the efforts to first conceal her, then not to feel guilt afterwards that her body wasn't covered by the men who executed her. Her crime is punished in a way that in its subtleness is disturbing--she executed for money, not for political motive, which is why her execution is aesthetized in distinctly vivid ways.
The execution of "Jeanette"(Marie-Josée Croze) differs from the laid out naked corpse of "Carl"(Ciarán Hinds), in dim hotel light --actually no comparison.

The walk on representation of Golda Meir is also shallow and a caricature no doubt because of poor scripting.

There is just execution after execution in this film, no analysis of what was going on at the time with the asassination of the 11 athletes. Nothing revealed other than violence. A pointless film in this respect in which nothing is learned. Other than that violence solves nothing. The aesthetics of violence should excite. Which is why so many analyses of the film confine themselves to apartments exploding and glass shattering. There is no inspiration to learn more from the film, only what the film lacks and doesn't discuss.

If studio execs prefer Brokeback Mountain over Munich it is because Lee's film provides a background and conceptualization of the brutality and repression of homosexuality with emotion. Kuscher and Roth try to humanize Eric Bana in between executions, and off assignment but it doesn't diminish Spielberg's 167 minute tirade of cinema time and space destruction.
Posted by Moira Jean Sullivan