"No Tears, No Applause, No Ontoward Outburst..."? 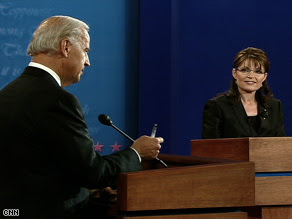 There was only one clear issue in the "debate between Joe Biden and Sarah Palin that both Democratic Republican VP candidates agreed on - according to moderator Gwen Ifil. But having done that, why did it prompt hearty laughter from the conservative Washington University student body in Missouri? Was it comic relief, or was it such a clear cut choice that it was non-polemical? The entire round of exchange took probably tops 3 minutes - and we're on to "foreign policy".

"IFILL: The next round of -- pardon me, the next round of questions starts with you, Sen. Biden. Do you support, as they do in Alaska, granting same-sex benefits to couples?

BIDEN: Absolutely. Do I support granting same-sex benefits? Absolutely positively. Look, in an Obama-Biden administration, there will be absolutely no distinction from a constitutional standpoint or a legal standpoint between a same-sex and a heterosexual couple.

The fact of the matter is that under the Constitution we should be granted -- same-sex couples should be able to have visitation rights in the hospitals, joint ownership of property, life insurance policies, et cetera. That's only fair.

IFILL: Governor, would you support expanding that beyond Alaska to the rest of the nation?

PALIN: Well, not if it goes closer and closer towards redefining the traditional definition of marriage between one man and one woman. And unfortunately that's sometimes where those steps lead.

But I also want to clarify, if there's any kind of suggestion at all from my answer that I would be anything but tolerant of adults in America choosing their partners, choosing relationships that they deem best for themselves, you know, I am tolerant and I have a very diverse family and group of friends and even within that group you would see some who may not agree with me on this issue, some very dear friends who don't agree with me on this issue.

But in that tolerance also, no one would ever propose, not in a McCain-Palin administration, to do anything to prohibit, say, visitations in a hospital or contracts being signed, negotiated between parties.

But I will tell Americans straight up that I don't support defining marriage as anything but between one man and one woman, and I think through nuances we can go round and round about what that actually means.

But I'm being as straight up with Americans as I can in my non- support for anything but a traditional definition of marriage.

BIDEN: No. Barack Obama nor I support redefining from a civil side what constitutes marriage. We do not support that. That is basically the decision to be able to be able to be left to faiths and people who practice their faiths the determination what you call it.

The bottom line though is, and I'm glad to hear the governor, I take her at her word, obviously, that she think there should be no civil rights distinction, none whatsoever, between a committed gay couple and a committed heterosexual couple. If that's the case, we really don't have a difference.

IFILL: Is that what you said?

PALIN: Your question to him was whether he supported gay marriage and my answer is the same as his and it is that I do not.

IFILL: Wonderful. You agree. On that note, let's move to foreign policy." (Laughter from audience).

Palin and Biden are consistent in one respect: "infantalizing" same sex partners via limited civil rights. 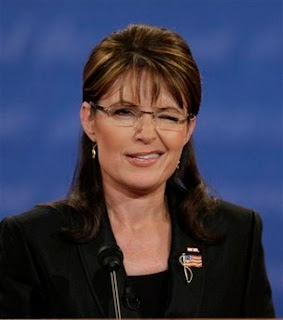 The Alaska Governor is known for "Palinisms" (not unlike Bush Juniorisms) - circuitous often indirect and nonsensical mumbo jumbo. Let's look at it Sarah: Gwen's question to you was whether you supported gay marriage and "your answer is not the same as Joe's and it is that you do not". You explained that some of your "friends" would not be happy that you are "tolerant" of everyone's right to choose a partner. You admitted you have a "diverse" group of friends ( gay?). But that you are skeptical of same sex partners having hospital visitation and contractual rights. That in approving this you are concerned that we would be moving closer to the definition of marriage that is operationally "defined" as a union "between a man and a woman". BTW your colorful "folksy " superlatives: "bless their hearts, " the Feds" , "I betcha"," heck of a lot", and " darn" - and your Joe Six Pack and Hockey Mom analogies and beliefs on Russian foreign policy and climate change - will go down in history. 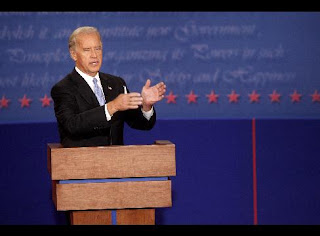 Joe, your "diplomatic " sanction of gay "civil rights" may appear more liberal. Maybe that is because you didn't have to imply "some of my best friends are gay" or "my other friends would not be happy about my position". But leaving the responsibility of same sex marriage up to "faiths" and "people who practice faiths" in a nation with a clear legislative separation of church and state is not far from cornball. Amen.