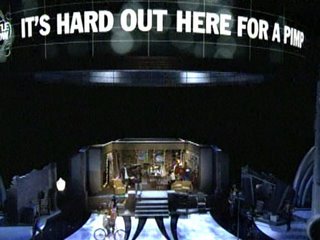 More on the hypocrite meter of liberal Hollywood. Gee we feel so sorry for these poor pimps that have it so hard that their woman hatred is the only outlet they have, instead of fighting for real change....
Did it occur to the creators of these lyrics that confronting racism in the USA allows involves confronting sexism? And what about all the lame ass liberals that voted for this while at the same time rewarding CRASH? Sexual discrimination is at the bottom of racism making the message of Brokeback Mountain far more radical....But this is Hollywood...superficial treatment of "the human condition" at all costs.

The songs from CRASH, Transamerica and Hustle and Flow display the intersection of gender and race themes. Next year they will be showing montages of the fact that films about pimps aren't all that rare, now that films about prostitutes have oversaturated the market. But how can you sing against racism and beat on women.

DJAY F/ SHUG - IT'S HARD OUT HERE FOR A PIMP LYRICS
Jordan Houston, Cedric Coleman and Paul Beauregard
[Chorus 2X: Shug - singing] + (Djay)
You know it's hard out here for a pimp (you ain't knowin)
When he tryin to get this money for the rent (you ain't knowin)
For the Cadillacs and gas money spent (you ain't knowin)
[1] Because a whole lot of bitches talkin shit (you ain't knowin)
[2] Will have a whole lot of bitches talkin shit (you ain't knowin)
[Djay]
In my eyes I done seen some crazy thangs in the streets
Gotta couple hoes workin on the changes for me
But I gotta keep my game tight like Kobe on game night
Like takin from a ho don't know no better, I know that ain't right
Done seen people killed, done seen people deal
Done seen people live in poverty with no meals
It's fucked up where I live, but that's just how it is
It might be new to you, but it's been like this for years
It's blood sweat and tears when it come down to this shit
I'm tryin to get rich 'fore I leave up out this bitch
I'm tryin to have thangs but it's hard fo' a pimp
But I'm prayin and I'm hopin to God I don't slip, yeah
[Chorus]
[Djay]
Man it seems like I'm duckin dodgin bullets everyday
Niggaz hatin on me cause I got, hoes on the tray
But I gotta stay paid, gotta stay above water
Couldn't keep up with my hoes, that's when shit got harder
North Memphis where I'm from, I'm 7th Street bound
Where niggaz all the time end up lost and never found
Man these girls think we prove thangs, leave a big head
They come hopin every night, they don't end up bein dead
Wait I got a snow bunny, and a black girl too
You pay the right price and they'll both do you
That's the way the game goes, gotta keep it strictly pimpin
Gotta have my hustle tight, makin change off these women, yeah