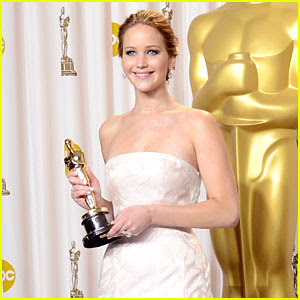 When Jennifer Lawrence was asked to be on the Actor’s Studio she declined claiming she has no 'method' of acting.  She has played strong women in 'Winter’s Bone' and 'The Hunger Games', and now in 'Silver Linings Playbook'. Since declining to be interrogated by the caustic James Lipton she may inspire many young actors who haven't had a formal acting, singing and dancing education from the minute they were born.  There are some like Lawrence who are creative souls that are born to act.

At 22 Lawrence has made uncanny remarks that reveal introspection and wisdom. Her take on life is refreshing and her sense of humor is endearing. At the Oscar backstage press conference she remarked in gest that journalists, all issued with numbers, were taking turns making fun at her, such as if she worried that success had come too soon. "I do now", she answered clearly taken aback by the question.
In a recent interview she reveals she doesn't like to talk about herself, and that it is not healthy to do this all the time. At home she may wear the same clothes three days in a row. She also feels the penetrating eyes of the paparazzi and knows her personal freedom has been clipped. It is a bit scary to see what the fashion designers and photographers are doing with her much like Kristen Stewart where she is asked to pose as personas such as for Dior that are very much unlike the person she appears to be in her interviews. Will fame change Jennifer Lawrence? It probably will if she doesn't have good people looking out for her. This brings to mind the truthfulness of the comments of Jodie Foster at the Golden Globes who said there was a camera in her face from an early age.

"Silver Linings Playbook" directed by David O Russell is moving and engaging. Two misfits who are taking medication for depression - Tiffany (Lawrence) and  Pat (Bradley Cooper) meet while jogging. Pat has been issued a restraining order towards his girlfriend and now lives at home with his parents. Down the street lives Tiffany, the widow of a local who took out her grief by sleeping with the male and female staff at her job and was consequently fired.  Tiffany promises to get a letter to Pat's girlfriend but wants something in return -  that Pat enter a dance contest with her.

The yin and yang of the film with complementary opposites is fairly simplistic and geared for a general audience. Dance will help make Pat feel but his father played by Robert De Niro, likes to bet on football games. He has been banned from games since he fights but wants his son to go to games for him and improve his betting odds with his neighbor. It is not hard to figure out the roots of Pat's depression growing up with this father.

Russell puts Tiffany center stage and the clever young woman suggests a bet to see if the Eagles can beat the cowboys and that she and Pat will get a score of 5 from the judges at the dance competition.
Lawrence was promoted for the Oscar by Harvey Weinstein and as she admitted at the Golden Globes she asked him "who she needed to kill" for the part. It is clear that producers push their talent for awards which increases their box office receipts. It's not altogether fair to Lawrence who shows incredible acting acumen in the film and is the lynchpin to all the other characters, even outshining Bradley Cooper.

With this award, unlike Anne Hathaway's fifteen minutes of screen space in "Les Misérables"that brought her a supporting actress Oscar, Lawrence is destined for great parts. Hopefully she won't be pigeonholed into playing women with mental problems as the result of the award, which often happens with an Oscar winning performance. One need only look to Meryl Streep to realize that it doesn't have to go this way, and one of the reasons why she is so highly regarded in the motion picture industry. "The Hunger Games" will continue and Lawrence knows what will happen here, but she is such a talented, insightful and resourceful actress that her future roles will be very exciting to follow.  The world needs more young women like Jennifer Lawrence and her Oscar is also a nod to all of us for choosing someone like her to represent our ideas about life.
© 2013 - Moira Sullivan - Date: 02/26/13
Posted by cinefemme No comments: Links to this post