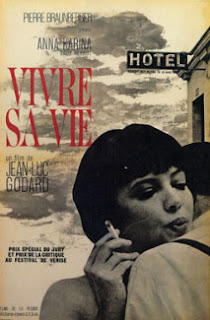 Vivre Sa Vie: Film en Douze Tableaux (1962) is one of J L Godard's earliest films starring his wife at the time, Anna Karina. The form of the film is twelve tableaux or chapters, a narrative convention in several Godard films. The twelve chapters follow the evolution of Nana's metamorphosis from wife to prostitute - "the life". (The English translation of the title, My Life to Live, betrays the meaning of the title).

There are frequent gazes by Anna Karina at the camera, and shots of Paris as a moving image tour by cinematographer Raoul Coutard, in medium and long shot. The reverence with which Godard frames his young wife is captivating.

Out of financial desperation Nana becomes a prostitute in Paris. Godard's preoccupation with the theme of prostitution is well known. An opening quote sets the stage, "Il faut se préter aux autres et se donner a soi-mème by Montaigne -"lend yourself to others and give yourself to yourself" (Man ska låna sig åt andra och ge sig åt sig själv). Ironically Nana is never able to do this. She is caught in the world of assumptions about women, which inevitably involve sexual metaphor. "If you say something coarse to a woman and she protests, she is a slut", says a man in a café, "but if she smiles, she is a lady". To stand apart from the ordinary prostitute, Nana is quickly established as a lady when a pimp tells Nana that her hairstyle is ugly, and she smiles. She soon turns to prostitution after she is locked out of her apartment for not paying rent.

1 Un bistrot - Nana veut abandonner - Paul - L'appareil a sous. (At a bistro, Anna wants to leave Paul, flipper, pinball game)
The film begins with Nana breaking up with her husband Paul and leaving him and their child. She has fallen out of love because he doesn't seem to notice her and she thinks he is mean. She wants him to loan her 20 francs, her rent, and he refuses. He has taken photos of her which she wants to see. She tells him that she has met someone who thinks she has a chance in movies. When she meets this man he shows her models of his work with scantily clad photos of women that he claims he sends to producers. She also asks him for 20 francs.
In real life J L Godard wanted to put Anna Karina in Breathless (1960) but she refused to star naked. He argued that she had already taken off her clothes for Palmolive as a model. Anna Karina was indignant and said that she was wearing a flesh toned bathing suit and accused Godard of undressing her in his mind.

2 Le magasin de disques- deux mille francs - Nana vit sa vie (at a record shop, two million francs, Nana lives her life)
3 La concierge - Paul - La Passion de Jeanne d'Arc - Un journaliste (The concierge, Paul and The Passion of Jeanne d'Arc, a journalist.)
Nana works in a record shop where a clerk owes her 20 francs. At night she goes to the movies and in one scene she watches The Passion of Jeanne D' Arc by the Danish director Carl Dryer (1928) with classic closeups of Maria Falconetti's face. In the scene Jeanne is interrogated by priests including the sympathetic father played by Antonin Artaud who tells her she is going to die and will be burned at the stake. One of many premonitions on the death of Anna.

4 La police - interrogatoire de Nana (the police interrogate Nana)
Nana is arrested for theft from a woman who "drops" 1000 francs. Though she offers to return it, the woman presses charges. She has now lost her apartment and claims she lives with friends. The police asks her what she is going to do and she replies, " I don't know, I am someone else". Already Nana has separated from her authentic self.

5 Les boulevards extérieurs. Le premier homme - La chambre. (The suburbs, the first man, the bedroom).
Nana goes to the suburbs of Paris where other prostitutes gather. Later she is propositioned by a man for sex. She is repulsed by her first encounter, a man who forces him to kiss her with an open mouth.

6 Recontre avec Yvette - Un café de banlieue - Raoul - Mitraillade dehors (Meeting with Yvette, a café in the suburbs, Raoul, shooting outside)
Nana meets Yvette, a housewife with children abandoned by her husband who has become a sex worker. Nana remarks that everyone is responsible for their actions. J L Godard may imply that Nana is not a victim, but freely chooses her lifestyle. Yet in almost very encounter with men she is a commodity of exchange that works against her will. The necessity of prostitution for the buyer is articulated. A French in the background tells the story of a man who lives with his wife in the suburbs, where his wife doesn't wear sunglasses and works in a factory in Créteil. They live a domestic life and only see his godmother, and never go to the Riviera. Anna looks straight into the camera. Nana meets Yvette's pimp, Raoul, who tells Nana her hairstyle is ugly. In Godard's Band à Part, Arthur first gets Odile's attention (Karina) by telling her that her hairstyle is ugly.

7 La Lettre - Encore Raoul - Les Champs Elysées (the letter, enter Raoul, Champs Elysées)
There is a closeup of Raoul's financial ledger with the women he pimps. A man is shot outside the café. As the police rush up, Nana runs away to another café overlooking a large boulevard. She writes a letter to get work in a firm on referral from a friend, and offers to send a photo. Raoul who has followed her tells her she can make much more money as a prostitute. He begins by telling her that she radiates goodness and that he is her friend. Nana wonders what category of women he has put her in. He replies that there are three categories: women with one, two and three expressions. After the conversation Raoul blows smoke in her mouth and she blows it out with a smile.

8 Les aprés-midi - L'argent - Les lavabos (bathroom sink) - Le plaisir - Les hôtels (afternoon, money, pleasure, hotels)
A series of off screen questions between Raoul and Anna establish the nature of her work: how much she will earn, what happens with the police, etc. He tells her the law. Before 1946 known prostitutes were registered with the police and health board and since 1947 only with the health board. In 1958 prostitutes are not supposed to walk back and forth on the streets, and stay away from Bois du Bologne and Champs Elysees. The establishing shot for this line of questioning is the Arc d' Triomphe on the Champs Elysees, then shots of Nana in a car, her hands receiving money, and shots of fully clothed clients and fixtures in hotel rooms. 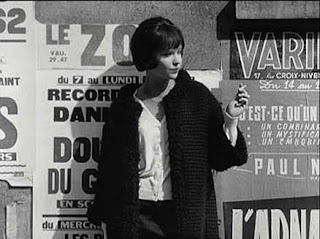 9 Un jeune homme - Luigi - Nana se demande si elle est heurese A young man, Luigi, Anna wonders if she is happy
10 Un trottoir - un type - le bonheur n'est pas gai (A sidewalk, a particular type of man, happiness is not gay)
Frequent artful closeups of Anna Karina's face used by Godard created her legendary iconography. One poster shots for the film is Nana standing in a sunlight in front of a billboard on a street smoking before she meets a trick. She leaves with a man, un type, who changes his mind about whether he will pay for sex or not in a threesome.
Anna Karina loved to dance and sing, and in this sequence Nana dances to a jukebox for Raoul and his men in a billiard hall and a young man she falls for. Raoul promises to take her to the movies but changes his mind. As part of the ritual used to establish prostitution, she swings around a pole, with the lyrics of a French tune "swing swing swing" in refrain.

11 Place du Châtelet - L'inconnu - Nana fait de la philosophie sans les savoir (Place du Châtelet, the unknown, Nana unknowingly, ovetande, engages in philsophy)
Nana asks an old man to buy her a drink in a posh café. In real life this is the philosopher Brice Parain. They speak about the regulating function of words. References are made to Plato and The Three Musketeers. The philosopher says one lives another life by not speaking and has to go through death. During the conversation Nana looks at the camera. Knowingly.

12 Encore le jeune homme - Le portrait ovale - Raoul revend Nana (Enter a young man, The Oval Portrait, Raoul sells Nana).
Godard in voice over quotes The Oval Portrait by Edgard Allen Poe (Oeuvres Edgar Poe) while the young man Anna has fallen in love with reads in bed. In the passage an artist paints his wife and in its perfection realizes she must die. Anna is going to quit working for Raoul and move in with her lover. Raoul grabs her as the husband of the concierge does when she tries to get the key to her apartment. She is taken for a ride in a car with a bunch of thugs. She asks what she has done wrong. Raoul tells her she has refused customers, and she responds that they disgust her. In a set up she is for the final time exchanged for money with another group of thugs. Raoul shorts them 1000 franc, and they don't hesitate to shoot her. Afterwards Raoul completes the execution and shoots her. The film ends.

As Godard explores prostitution, he postures his own wife as a commodity throughout the film. After her first film with him he didn't want her to work anymore, ironically a typical scenario when a customer falls for a prostitute, and the ultimate commodification through total ownership. It is not unlike a pimp taking control of an independent prostitute.

Karin left Godard seven years later, and he was so indignant that he cut up her clothes. Their marriage can be described as highly toxic, with periods of calm, fighting, possessiveness and desertion. After years of this, their final collaboration was Made In U.S.A, where Anna Karina shows her defiance of this liaison to the camera, a film that signifies the end of the relationship.