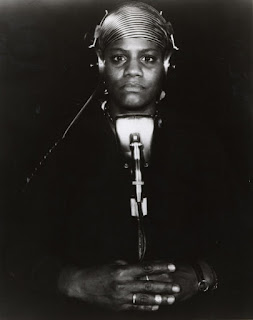 When she received the Grand Prize at Créteil Films de Femmes in Paris in 1983, Lizzie Borden said that the film took over four years to make because they ran out of money.  The total production cost for this 16mm film was $40,000. French feminists were so moved by the film that they called it a dream and believed it accurately reported their reality and the issues they were struggling with at the time. There has not been a film like Born in Flames since then at Créteil. It lives on as one of the best feminist films ever made.

Born in Flames takes up how class, race and gender affect working conditions and how women are treated, at home and on the streets. And because women are not treated very well in any of these areas, a woman’s army is created. Women on bicycles come to the rescue of women harassed or assaulted in the streets, and patrol the metro helping female commuters in distress (Dana Johnson)  All of this is reported on by the media and twisted and turned several notches. The sensational news that  “men are being attacked by women” is the net result.  The liberties that the media takes when reporting on attacks on power institutions has never changed. Alternative media has never been more important for getting truth out. This is one of many important premises of Born in Flames.

All of these occurrences take place ten years after the socialist (democratic, i.e. capitalist) revolution in the USA. But judging from the film, what kind of social democracy could there have been? Borden shows how collective bargaining leaves women with the short end of the stick. Unions do not stand behind women. The only policy change in this new government is a program to pay housewives for work. It is not safe for women on the streets or at work where they can show up and be fired in seconds. This contributes to a brewing anger among women. Men of color are also excluded from socialist equality in the labor force of this (futuristic)society. They loudly protest and are beaten by the police.  The women’s army works to build alliances with them.


It is a misnomer to label this film feminist "science fiction" for it is an accurate report of the status quo in politics at the time the film was made and holds true even today. Radical feminism from the 70’s has been inaccurately called  a "white women’s movement". Perhaps because only white heterosexual feminists were reported on by the media. White lesbians and lesbians of color were not. The media was not interested in them, and their stories did not make the papers like those of heterosexual white feminists such as Gloria Steinem, Betty Friedan and Germaine Greer. Feminist superstars may seem to have spoken for women. But grassroots radical feminists did the hard work and battled the territory for far more than equal rights and took up issues that media feminists did not dare to. Rights that young women enjoy today and take for granted.

Born in Flames is about this grassroots movement. Two competing feminist pirate radio stations have dedicated followers. The Radio Ragazza spokesperson is of European descent. Isabel uses spoken poetry to bring up issues of disenfranchisement and standing united. Honey is the anchorwoman for Phoenix Radio and is African American. She also urges women to come together.  It clear that the two stations with their fan bases are divided racially. Born in Flames is important as an historical document because it shows how interracial alliances evolved and co-existed during 70’s feminism. It is proof that this was not only a "white women’s movement", and as an historical document it is extremely valuable. Commentary by the police who investigate the women's army positions women in terms of color, and sexual orientation. Queer women of color were  a threat and alliances made to unite queer women suspect. These women were forgotten and excluded and targeted for attack.

The women’s army is racially integrated.  Hillary Hurst (interviewed by Movie Magazine, June 2007) who plays herself is a white captain, joined by African American Adelaide Norris (Jean Satterfield). She is inspired by the heroic efforts of an African leader from an unnamed country in armed struggle (Dolly Udemzue) and is invited there to learn combat skills. On the way back from guerilla warfare training she is arrested at the airport and later confined to a jail cell. Shortly after it is reported that she killed herself. Zella, an outspoken and saavy mentor to the women's army , in particular Adelaide, and friends with the social democratic mayor realizes immediately that this was no suicide but murder. The hushup of the event includes the mayor. But the news breaks.

Monitoring the efforts of the women’s army is the "Socialist Youth Review" paper with three editors played by Becky Johnston, Pat Murphy and Kathryn Bigelow (best director Academy Award winner of 2010 and the first woman to win in this category). The editorial team comes to terms with how they are being duped by the party and also believe that Norris was executed in her jail cell.  They see the connections between class, race and gender neatly suppressed by their sweet talking editorial boss, who later fires them for the Norris story.

The murder sets off a series of incidents. Radio Ragazza and Phoenix merge against their common enemy: an entrenched and omnipotent gender hierarchy within power structures. Later their respective headquarters are bombed but they continue to get on the airwaves in anyway possible. Several armed women go to news stations like CBS and demand at gunpoint that the technicians put on news of the cover-up of Norris’ murder on live TV. In the end a woman manages to get to the roof of the World Trade Center and plants a bomb for knocking off the rooftop broadcasting antennae. This monument of commerce and media broadcasting has historically been targeted for political purposes.


Born in Flames is a visionary response to oppression and one that targets the media for twisting the truth.

The assemblage of images in Born in Flames is candid and provocative, serving as a time capsule of feminist politics of the time. And because nothing has really changed in the political analysis of gender politics it is important for today’s radical feminism.  Especially that women of color must be at the center of any feminist struggle.


Ed Bowes is credited with the screenplay and who also worked with feminist director Sheila McLaughlin (She Must be Seeing Things, 1987). Al Santana  and Bowes did the cinematography.
Posted by cinefemme

What is your email address?