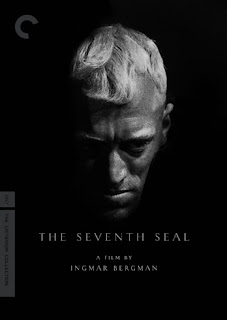 The Seventh Seal is, in real time, a thirty-minute reprieve from the “apocalypse.” This is symbolized by the Black plague of the Middle Ages during the 13th century, a disease that spread between victims at eight kilometers a day. The Christian clergy randomly blamed people for its spread, in one case burning a young woman of fourteen at the stake. For Swedish director Ingmar Bergman, the film served as an allegory to the cold war of the 50s and the threat of nuclear warfare. Because the rapid advancement of the plague is abundantly featured in the film, the thirty-minute reprieve becomes an evolutionary and meditative journey.
Fourteen years after a Holy Crusade, Antonius Block returns to the south of Sweden. At that time it encompassed Denmark with the festival of saints at Helsingör and Roskilde as geographical references in the film. The most famous scene of The Seventh Seal opens upon Block at the eastern coast of Sweden. Death suddenly appears, covered in a black cloak from head to toe:
“Who are you”, asks Block.
“I am Death,” the figure replies.
“Have you come to get me?”
“Yes.”
“Wait a minute.”
“Everyone says that.”
“But I don’t grant any reprieves.”
“You play chess don’t you? I’ve seen it in paintings and heard it in songs.”
The game begins with moves on board, which serve as plot changes. A field trip to a church with frescos illustrates the story of the plague as a death ritual. The thirty-minute reprieve Block requests is for him to experience one meaningful deed before he dies. He tries to trick and is tricked by Death, who poses as a confessor at one point while Block reveals his game plan.
Block’s quest is for “vetskap” (knowledge), but he is also aware of his corporeality. At one point he holds up his arm exclaiming, “this is my hand,” as in the Christian sacrament of Holy Communion when the liturgy intones “this is the body and blood of Jesus Christ.” The knight meets a circus family: Jof, Mia, and their little two-year-old son Mikael. Jof predicts that Mikael will one day be able to suspend a ball in mid air, such supernatural powers providing allusions to Jesus and his parents, Mary and Joseph. It is Jof, however, who appears to have mystical powers — his visions indeed serve to save his family from death. Jof sees not only the Virgin Mary but his death, his family’s, and that of others.
Bergman’s films often depict the artist as an outcast and at one point in The Seventh Seal Jof is asked to dance as a bear, awaking superstitions of the people at an inn who need a scapegoat for the plague. Such a mime evokes the medieval custom of sacrificing a bear for atonement. Likewise, processions led by clergy carry not only witches for burning but a parade of flagellates paying for their sins.
The Seventh Seal is not only a medieval drama play. Bergman also manages to instill his film with references to his philosophy on women, elsewhere seen in Monica, The Story of a Bad Girl, Persona, and Cries and Whispers.
At one point an actor from the circus is seduced by Lisa, the wife of blacksmith Plog. They escape into the forest and are later discovered by Plog and Block's squire, Jöns. The forest is feared for bears, wolves and ghosts but primarily Death, symbolized by thunderstorm, lightning, and rain. Jöns and Plog converse about how Lisa should be killed, as all women, for their deception, harking back to the garden of Eden. “Lust is one thing,” says Jöns. He tells a woman he “saves from rape” that he is tired of “that kind of love.” Plog and Lisa are however reunited and cry out that the actor should be killed, shifting the burden to the artist as outcast. Death, like the church, has a thing to say about the adulterer, who fells a tree the actor has scurried up, leaving a squirrel to sniff at the fresh cut of its roots.

ONE HUGE QUESTION ABOUT THIS FILM IS NEVER BROUGHT UP IN FILM CRITICISM:
Upon meeting the young girl condemned to death, Block cannot help but ask why. He means to interfere and prevent the fate, but supposes she is half dead already. There is plenty of time before she is set on fire, so it is curious that he waits until the last minute. (Was that not a good deed?)
Convinced of “tomheten” (emptiness) Block wanders away to the circus family where he has a bowl of “smultron” (wild strawberries, offered to him by Bibbi Andersson as in Wild Strawberries, made the same year). The symbolism of the meal points to one other existential truism, that for the moment daily bread is enough.
When the travelers make their way to Block’s home they are met by his wife, who prepares the last supper. Death is welcomed into their home and we later together with Jof see them led by Death brandishing a scythe in a dance on the hill. The Seventh Seal is riddled with conventional metaphors about death and women, and the artist as outcast, a fate Bergman himself would experience two decades later when accused of not paying his taxes.
NOTE: Criterion features a new digital transfer special edition of The Seventh Seal, with loads of extras!
Used by permission for:

This seems like a very interesting piece. I enjoyed the movie Meet Joe black and your summary some what reminds me of it. Looking forward to reading this.