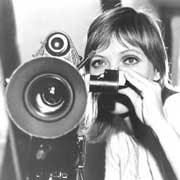 Only one print of "Vivre Ensemble" in the whole wide world?! Anna should have it preserved. The film should be made available on DVD to reach a wide audience. I hope it will be in circulation soon. Same with "Victoria". I understand she will direct another feature film in the near future. Can't wait to listen to Anna's latest interview. Moira, you're so lucky to have met her in person! Please post a transcript of the interview! And more details of your meeting with her!

When I saw Vivre Ensemble screened at Cinema Lucarne at Créteil I was told there was only one print of the film. I am not surprised, but perhaps there is another copy abroad that they are not aware of? You can listen to the interest at 9pm PST 90.3 FM San Francisco, April go in to shoestring.org/listen.html and you can hear it through KUSF. Also for one week beginning April 1 on the same site. I was indeed lucky to meet Anna. She is a very sweet and generous person, full of life and humor. We spoke a little Swedish/Danish--she doesn't go to Denmark now, has no family and all her friends are in France. She has also never been in Sweden!

Anna's mother was the costume designer on Carl Th. Dreyer's "Gertrud". Anna was to have played the Virgin Mary in Dreyer's planned "The Life of Jesus" but he died before the film could be realized. Anna appeared in a Danish film entitled "The Man Who Would Be Guilty" (1990?). Jonathan Demme begged her to make a cameo in "The Truth About Charlie". I hope she makes more films besides her own. Perhaps with directors like her fellow Dane Lars von Trier and Francois Ozon.

Thanks anonymous, (do you have a name?) for this excellent background, which I did not know about. Anna said her mother died recently and that she has no one left in Denmark. I wish she would make more films, but Victoria is a fresh start. She said that she travels a lot to film festivals and is invited to many countries. I don't really see her with Lars von Trier but definitely François Ozon. Also many fine directors from Créteil Film de Femmes. In Vivre Sa Vie there is even a song with a reference to the factory workers in Créteil! Keep in touch anonymous!

Anonymous no more-- call me Jackstone! Thanks for the info. You were in an enviable position to have interviewed a living legend personally. I saw some photos of Anna in Creteil on a website called Citizenside. She looks youthful and lovely in the pictures. According to Richard Brody's Godard biography "Everything Is Cinema", Anna's son with Godard was stillborn. Could "Victoria", which is about a woman reconnecting with her lost son, be a bit autobiographical? I also saw recent photos of Anna with her fourth husband, Dennis Berry, the son of blacklisted American director John Berry and the ex-husband of Jean Seberg. It's not clear if they are still married. A news item says that Anna's next project will also be filmed in Quebec, but in the Southwest area.

Hello Jackstone!
That is a good point, I didn't know about Anna's stillborn baby - Victoria is about a woman who has amnesia and then finds her long lost son - they have been separated since he was about ten. There is a younger Anna Karina type in the film that is the son's girlfriend that dies in an auto accident. When Anna realizes its her son, she drops a wallet with a photo of him, on the outside I noticed it is written: "Jeg elsker dig" (I love you in Danish) I told Anna understood that since I speak Swedish.
There is a recent documentary of Anna that was shown at Créteil too.
Anna is divorced from Dennis Berry. BTW where do you get all your information, its very up to date!
Anna was the head of the jury at Créteil about 15 years ago, I met her then too. She really likes the festival, and they showed several of her films, with a reception and recontre after Pierrot le Fou with Anna.
Go to the Créteil festival website for more photos
http://www.filmsdefemmes.com
À bientôt!

Moira-- I have been an admirer of Anna K's since I was a teenager. There's so much info on her on the web and in books. I was entranced by her performances in the Godard masterpieces of the 60s. I collect DVDs of her movies as well as her CDs. I would love to catch "Vivre Ensemble" and "Victoria". I read that Truffaut liked "Vivre Ensemble". There are other films I'd like to see-- "L'Alliance", for example--as well as revisit gems that have long been out of circulation ("Laughter in the Dark", "The Stranger"). There is a wonderful film site entitled "Like Anna Karina's Sweater". Composer Jackie DeShannon and rock band Pell-Mell have written songs entitled "Anna Karina". Kelly Osbourne channeled her in the video "One Word". A punk Italian band is called "The Death of Anna Karina". As to the reference on Lars von Trier, Anna told actress Amira Casar at the Montreal Film Festival a few years ago that she wasn't afraid of Lars. My email is: jackstone54@gmail.com

Could you give us some more information about the documentary on Anna Karina?

Hello Rochelle, I am very happy to have had the pleasure of interviewing Anna. She is in good shape, looks great, better than the digital pictures which I think are horrible of anyone beyond age 20. She is full of humor, her eyes twinkle, she is compassionate and thoughtful. Warm and appreciative.
The documentary which is not listed on IMDB in fact was made in 2004 by Fabrice Ferrari, Pierre Bouteiller Productions ( he poses the questions--quite good documentary). PB Productions/ Ciné Cinema,

Do you have any idea when Anna will next make a public appearance? Also, I am having a hard time finding any of her films on DVD. I would love to have "Anna" if anyoneone knows where I can find that.

Anna will be at the Melbourne Film Festival in July. She will be the subject of a small retrospective-- "Alphaville", "Anna", "Vivre Ensemble" and "Victoria".
All of her films are out on DVD with Godard: Le Petit Soldat, Band à Part, Vivre Sa Vie, Pierrot le Fou, Made in USA, Une Femme est Une Femmes, Alphaville. Also The Magus, Justine, La Ronde, Cléo from 5-7, La Religieuse --all are at Amazon. Anna (1967-TV) is apparently out on DVD in Japan through Amazon. Check imdb.com for filmography and DVDs

La Religieuse and Justine are only on VHS.

La Religieuse is fantastic, so try to rent it!

Anna Karina will be coming to receive a special tribute at a special program for Mill Valley Film Festival in California in the spring. Due to a minor accident she was unable to attend the festival that runs Oct 8-18 where her film Victoria will be screened.

awesome info about anna.i am a huge fan of her and her movies. it seems that you have seen Pigen og Skoene? do you know of some way to see it? i have searched very hard for info on it and hoped to maybe even find it, but no one seems to remember or care about the film. shocking. please tell me there is some way to see it?

I saw this at Créteil Films de Femmes, and although I don't know where they got the print, the Danish Film Institute lists it on their site. I have written them about Pigen og Skoene previously but no answer. Anna mentions this in the interview I did with her posted on this page....

Hi, Indeed I was lucky. Well there was only one print of that film that I saw at Créteil Films de Femmes a few years ago. I don't have transcript of that interview sorry. I wrote a letter to Sight & Sound in response to a world renowned film critic's remarks. Remarks were posted in his new anthology on film. I will put that up! Thanks for writing!

https://www.academia.edu/6390519/Letter_to_Sight_and_Sound_on_Anna_Karina
You can download that letter at this link.