The third Queer Women of Color Film Festival kicked off June 8 in San Francisco for a three day run, a festival that amazingly is free of charge. The inaugural night featured a presentation of filmmakers with work on the subject of immigration. And yes we do have our "Dykeback Mountain", (Laurie Koh,"Where's Our Dykeback Mountain? LGBT media at the crossroads", The Magazine of Film Arts Foundation July/August 2006 ). This is it, the films that defy mainstream and are the deep tributaries, according to Jewel Gomez, Village Voice critic, author of The Gilda Stories and guest panelist of the festival.
Which is to say, shorts. 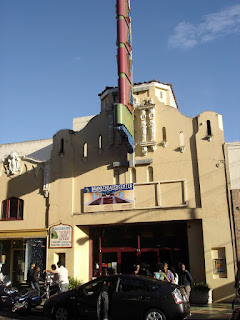 But not short by any means. And the executive director of the festival Madeleine Lim and development and events manager T. Kebo Drew made us all feel at home, inviting us to meals in the foajé and a upstairs fundraiser with the filmmakers and sponsors before the evening program. Lim is a Bay Area filmmaker and trains queer women of color on how to make films in the "Queer Women of Color Media Arts Project" supported by grants. The candidates work out a film proposal close to home and the result is this rich and exceptional festival, which in part helps to pay for the education of these talented filmmakers. Lim believes that women have stories to tell, whether about their origins, or their relatives or those ex girlfriends. Letting Go of An Attachment by Joy Lam, 2006 turned out to be a therapeutic film about a relationship that didn't seem to amount to really anything of substance , but it took the filmmaker six years to find out it wasn't "love". It is the beauty of this sharp audience to reinforce that awareness who warmly scrutinized the dialogue between the two women--and were they relieved when the character that plays Lam walked out!
We don't all need to reinvent The L Word. This festival proves there is a vast terrain of subjects out there which are personal to the lives of queer women. That is Lim's aim. While Jamie Babbitt (Itty Bitty Titty Committee, 2007) and Angela Robinson (D.E.B.S. 2006) lead with their left, its just a matter of time till we have more features out there too, and much of the work indicates the potential. Details Magazine published a report, oh, about 14 years ago, that if a film appealed to a lesbian spectator, the box office revenue went up 10 %. That is what landed Rose Troche (Go Fish, 1995) a spot in Hollywood who has since then directed , well, she did make some L-Word segments - and a film selected to the San Sebastian Film Festival, The Safety of Objects ( 2001). 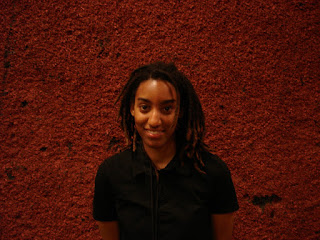 This particular festival of short films and docs is the work of women of color and this year there was a special focus on queer black women's films and filmmakers, over 40 films. Amazingly there was some criticism about that, the kind of logic that defies logic something like, if you only screen queer black women's work not as many will come.
Well, I don't think so, there wasn't a seat left in the Brava Theater in the Mission for the second day! These films will also be shown at the Frameline LGBT Film Festival slated for June 14-24 and director Jennifer Morris and Cheryl Dunyé were on hand for this three day fest.
And the films had a breathtaking array of themes: Ersulie's Tears about the beauty of this loa of the Vodoun spirit religion (Mary Ann Brooks, 2007) talking flowers - Flower Fokes (Belinda Sullivan, 2007) , the tranquility of meditation - Acts of Love (Crystal John, 2007), watch out how you treat your Mammy! - The Saint (Erin Wood, 2007) and self criticism in filmmaking - Wallow (Sarah Beth Harris, 2006). 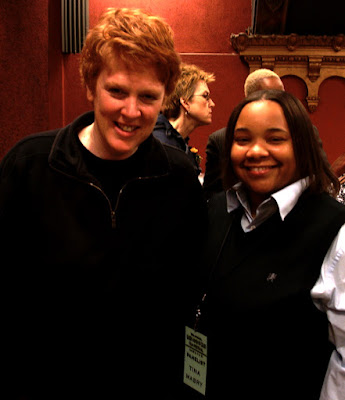 A panel discussion on queer black women in film featured Watermelon Woman and Stranger Inside herself Cheryl Dunye, back from Amsterdam after three years to make some more films in the JUESSAY, the queer programmer for Sundance Shari Frilot and Tina Mabry - Brooklyn's Bridge to Jordan, and co-writer Itty Bitty Titty Committee. 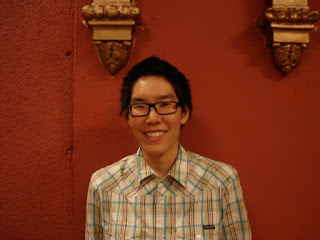 The final day of screenings at the Brava Theater included shorts of subjects such as military fashion in Fashion Resistance to Militarism (Kimberly Alvarenga, 2006), corn allergies and a Chinese girl growing up in the midwest Local Grown Corn (Mel Chen, 2007) - I know now why I have always hated Corn Flakes!
- and a provocative film on female rivalry and women loving women That's Why I Hate Females (Vassilisa Johri, 2007).
One of the most spirited debates occurred after the screening of Against our Better Nature on the subject of the death penalty (Kenya Briggs, 2006). The filmmaker's position is that we just don't have to kill to create justice.
The evening show presented films about love and family, including the poignant It Takes a Village ... (Kiki Zerrudo, 2007) about a queer mom raising a son, required viewing for every lucky boy with such a loving mom and circle of friends as well as a tribute to an 11 year relationship, the philosophical and playful Eleven (Arwyn Moore, 2006). 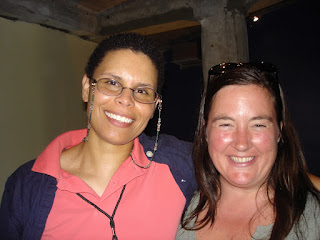 Probably every long term relationship would benefit from a screening of Eleven, it makes you proud to have a partner like Moore.
Mel Chen presented a magnifiqué plan for the distribution of queer women's cinema, soon to be in the pipelines: "QTPI Media". If you make it, let's it distributed!
Interviews with some of the directors and a report of the festival is scheduled for Movie Magazine International , broadcast on KUSF San Francisco. June 27 and later on the internet. Stay tuned!