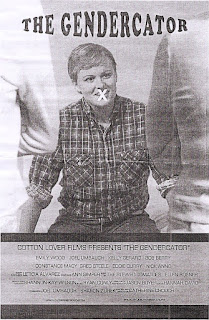 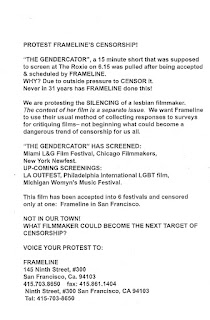 For the first time in 31 years, Frameline, the Lesbian, Gay, Bisexual and Transgender Film Festival in San Francisco (June 14-24), has taken an invited film out of the program. The Gendercator (USA 2007) has been pulled for being "transphobic", originally scheduled for screening on June 15th . Protesters brandishing picket signs stood outside of the Roxie Theater with tape over their mouths. The artistic director of the Frameline festival, Michael Lumpkin, appeared at the opening of the screening to explain that the decision to "OUT" Catherine Crouch's The Gendercator (USA 2007) came about due to pressure from the transgender community and underlined that "the decision to remove it was the correct one". Frameline programmer Jennifer Morris also stands by the decision claiming that the publicity released on the film by director Catherine Crouch and on her own website is "transphobic". Frameline's press release on May 22: "After considerable dialogue with members of the transgender community and after careful consideration of the issues raised by Catherine Crouch’s film The Gendercator, Frameline has decided not to screen The Gendercator in Frameline31. Given the nature of the film, the director’s comments, and the strong community reaction to both, it is clear that this film cannot be used to create a positive and meaningful dialogue within our festival. We are grateful to the many Frameline members, filmmakers and Transgender community leaders who brought this issue to our attention and assisted Frameline’s senior staff in making this important decision." The late night program (10.30 pm) was not sold out ( 30% seating capacity) and its hard to say how much of a factor the controversy over the film had on the screening. In my experience, experimental work at festivals is never sold out and is always about 30% seating capacity.

The protest to yank the film began by an online petition organized by New Left in San Francisco, a popular local internet forum. Prior to the screening about 130 signatures were collected. Only six of the protestors had actually seen the film. In Frameline's press release regarding the removal of The Gendercator they also revealed that they have partnered for screenings with Female to Male International, headed by president Rabi Levi Alter, the largest longest running organization serving the FTM community. There are about twenty films about transgenders featured at Frameline this year. The documentary Gender Redesigner (USA 2007) concerns the sexual reassignment surgery of "fAe", an FTM (female to male) transgender including interviews with the medical establishment that performs his double masectomy and a video journal during and after the procedure . Both the director Jonny Berggman and fAe, who has since relocated to San Francisco, were present at the Q&A. fAe , a transformer who also started a women's band called The Sex Combs spoke of the strong transcommunity in San Franciso.

Support for Crouch's film was visible outside the screening of the pre-empted film. Flyers (see above) were passed out to the perhaps 50 people attending the screening where The Gendercator was originally slated yet without any contact information for a specific action group.

The Gendercator was included in the "OUTer Limits" screening in a program of experimental and visionary filmmakers. The film is no longer searchable on the Frameline website and has disappeared from the radar. But in the program catalogue the film remains:
"In The Gendercator, a woman emerges from a pile of leaves to find her last memory is from 1978. Good acid, or is it 2048"? Four other films were part of the "OUTer Limits" program.
Frameline framed this venue as following. "Tripped-out futuristic lesbians! Sword-wielding S&M nuns! Cannibalism! Trannies in space! Welcome to the outer limits of queer filmmaking in this series of shorts by five visionary filmmakers clearly weaned on sci-fi and fantasy films". With emphasis on "queer filmmaking" and "outer limits", a case can be made that Frameline did know what it was programming.

When Frameline accepted Crouch's film, it was programmed together with: Agnieszka- a Dark Symphony of 2030, Martin Gauvreau 2007 Poland , The Incredible Dyke, Kurt Koehler & James Edward, 2007 USA ( how many dykes look like these dykes?--Frameline category: "Butch/Femme Issues") Transgender Express, Laure Schwarz 2007, Switzerland, Sister Satan, Viva Ruis 2007 USA and Transneptune or the Fall of Pandora, Drag Queen Cosmonaut, Matthew Long 2007. All of the films feature stereotypical iconography such as a huge green lesbian that beats up bad dykes in a bar or floating doped up transgenders. 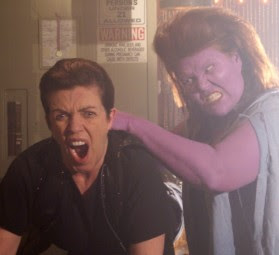 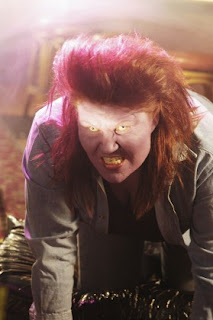 Film and artistic expression are subjective experiences. Without the opportunity to view a film we are forced to go by the experience of what others "see" and "interpret". Newfest chose to screen The Gendercator despite controversy with this perspective in mind and that an LGBT festival should have room for the perspectives of filmmakers from the spectrum of this community. Because of "descriptions" of imagery and content on Crouch's website, The Gendercator has provoked the transgender community in San Francisco though a screening has yet to take place. Thus, the largest LGBT film festival in the world, Frameline, has made a controversial move. 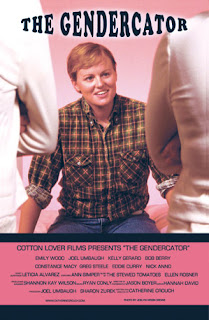 Catherine Crouch's short The Gendercator (shot in Super 8 and miniDV) features lesbian "Sunshine Sally "(Emily Wood). After celebrating the 1973 victory of Billy Jean King over Bobby Riggs she passes out under a tree. She awakens in 2048 to an era where feminism has failed. Sex roles and gender expression are not only binary, they are enforced by law and convention. Butch women and sissy men are out and Sunshine Sally has to choose a strict gender role. Sexual reassignment surgery works in hand with the government to enforce binary gender choices.
Catherine Crouch describes the piece as a “satire about female body modification and gender.” According to the director, “more and more often, we see young heterosexual women carving their bodies into porno Barbie dolls and lesbian women altering themselves into transmen. Our distorted cultural norms are making women feel compelled to use medical advances to change themselves, instead of working to change the world. This is one story, showing one possible scary future. I am hopeful that this story will foster discussion about female body modification and medical ethics". Crouch says that the films is about lesbians, not transexuals.

The New York Association for Gender Rights Advocacy (NYAGRA) believes that Crouch inaccurately portrays transgenders and was surprised that The Gendercator was screened at the recent New York Newfest. NYAGRA's mission " advocates freedom of gender identity and expression for all". The San Francisco transgender position is that one's artistic freedom in the LGBT context can not be at the expense of another group.

Pulling this invited film has had a negative impact on a productive low budget and independent lesbian filmmaker with nine films previously screened at Frameline. There is a divided feeling in San Francisco that the film should have been screened. According to Jennifer Morris, "there would be no point in a screening of the film with a discussion since it would so clearly offend half the audience". How is it possible to make a judgment like this without extending the public the opportunity to see the film? Art has historically generated discussion and it is within the nature of art to "offend" through the use of metaphor and personal expression. There are countless examples of artists that have "offended": Charlie Chaplin, Robert Mapelthorpe, Antonin Artaud, and Andres Serrano ("Piss Christ"). Morris pointed out that the film can still be screened and has been screened at other ("transphobic") venues. One of the venues for The Gendercator, she points out, is the "transphobic Michigan Womyn's Festival". Screening a film should not constitute a "transphobic" position or make a festival "transphobic". That is an important question for all future LGBT festivals.

The majority of the people who signed the New Left petition had not seen The Gendercator. Efforts are being made by Ondine Kilker to bring Catherine Crouch and The Gendercator to San Francisco in the fall. Catherine has made herself available to interviews and said she is open to discussion. (Listen to interview by Moira Sullivan with Catherine Crouch on Movie Magazine International, July 11, 9pm , or the national broadcast July 13-20.)