"I Give You The Queen" But We'll Take Ellen Anyday

Helen Mirren's triumphant Oscar win once again deferred kudos to The Queen, that is Queen Elizabeth of England. The film certainly brings out the royalist in almost everyone watching it, and certainly has brought it out in the 62 year old Mirren, whose Oscar win does not maker her anything close to a late bloomer. Watch her as a 22 year old in A Midsummer Nights Dream (1968). The question is if Queen Elizabeth gives a hoot about any of this. She most definitely enjoyed a good night's sleep in her castle on Oscar night, telecast 1.30 in the morning GMT. Although since the Oscars, there may be the possibility for Mirren and Elizabeth to meet. The Queen has not seen the movie and probably will not.

Anyone who has lived in Europe knows that the royals are drab, seldom make changes to their hairstyles, sport drab matronly clothing, and make drab official statements. Queen Silvia of Sweden is one example, and husband King Carl Gustav, moreso. His political speeches could be likened to the dimwitted George Bush, whose garbled geographical facts and political blunders are even rumored to be intentional. With Oscar held high over head, at the 79th ceremony which Mirren calls "the motherload of all award shows", she extended her generosity to a woman with comfortable shoes. Diana, Princess of Wales was the first one to bring glamour to a royal title, but that just irritated Elizabeth, a subject raised in Steven Frears, The Queen.

Lesbian prominence at the Oscars was certainly well noted, with Ellen Degeneres as awards show host, though the only reference to her lifestyle was an obvious remark on stage, presumably to partner Portia de Rossi, that she was bringing home party food after the show. De Rossi ( the Australian born Amanda Lee Rogers- a stage name taken when she realized she was gay) split up with Francesca Gregorini in 2004 to be with Ellen Degeneres. Though she appeared in tabloid pix with the daughter of Ringo Starr, she publicly came out after meeting Degeneres. The subtle and funny cutting edge remarks of Degeneres since her silenced Ellen show, "Hollywood would be nothing without blacks, Jews and gays" are so in for the Oscars. Everyone else who makes a political fuss at the Oscars is so snubbed if they hit head on. Eddy Murphy, for example. Leave it to the movies to carry the messages, the stars or celebrities must be careful about writing their own dialogue. Sherry Lansing brought that home upon accepting a special humanitarian award, from a real oxymoron, Scientologist Tom Cruise. The former Paramount head has produced a stable of provocative films such as " The Accused".

After the awards Degeneres was on hand for the Barbara Walters Oscar Special. The largest revelation was that she was molested by her mother's husband. The notion that the experience must have made her a lesbian was quickly defrayed by both Walters and Degeneres who were swift to point out that Ellen "loved men". Clearly all incest survivors don't become lesbians. It seems that its heterosexual women that seem to hate men anyway. We know that Ellen Degeneres is much more savy than the media ever makes her out to be and has done so much for lesbians.

Melissa Etheridge took time to thank her wife and children for their support while picking up an Oscar for best song of the year, written for David Guggenheim's doc starring Al Gore, An Unconvenient Truth which won best documentary of 2007. The lyrics are not terribly profound however, such as "I need to wake up, I need a change", regarding our environmental crisis. "This is not a "Republican or Democrat, blue or red state issue", said Etheridge. The Oscars also went green this year, with efficient vehicles and no limos and clearly supported the work of Gore, who has decided not to run for president but to carry on this important work of turning back the clock on global warming.

Degeneres all in all was a fairly average host, with a few truly funny moments such as Ellen "Oscar holders", vacuuming during the ceremony, and getting Steven Spielberg to take a photo of her with Clint Eastwood for My Space. She had previously sucked up to Martin Scorsese by presenting him with a script. Degeneres claims she has a fireman's pole in her home and just slid down it to do the Oscars. Academy Award President Frank Pierson says that Ellen has that "how do you do lightness" that works well with folks at the Oscars. Yes an and no. Elsewhere in her intro she lumped Penelope Cruz together with the other nominees from Mexico from Babel to Pan's Labyrinth, and in a cutaway the nominee for best actress took note. Later Degeneres, who should know better, said Spain was in the house, but it was too late.

The elegant Catherine Deneuve announced the category for best foreign language film which should have gone to Pans Labyrinth but went to Germany for Sophie Scholl, the Lives of Others. Deepah Mehta's Water (2005) was also a welcome nominee, the last of a trilogy of films including Earth (1998) and Fire (1996) , starring Shabana Azmi, the story of two women in love in India. Water, like Fire was interrupted by violent protests because of the subject matter. A riveting collage of clips from international cinema gave a definite quality tone to the awards as did a special award to composer Ennio Morricone who made his acceptance speech in Spanish, interpreted by Clint Eastwood. Deneuve enjoys regular work in Europe and said she wouldn't continue if she didn't love it. She even took a minor role in Lars Von Trier's Dancer in the Dark.

Two-time best actress award winner Jodie Foster ushered in a memoriam for show business professionals who departed this year that have had left remarkable legacies, including Robert Altman.

The Departed won for editing, best adapting screenplay, best picture and best director of 2007, bestowing Martin Scorsese with his first Oscar after countless nominations. The film is based on the 2002 Hong Kong production Infernal Affairs which delves into "Avici", living hell, the lowest level of Buddhism, starring Andy Lau and Tony Leung.

Unsurprisingly, Jennifer Hudson won best supporting actress for Dreamgirls. Its a necessary nuisance that her rise to fame began with the troll of all TV shows, American Idol. But its not surprising that she rose to the top since the cynical and sinister Simon made a horrendously ill fated decision to dump her from the musical world's worst "rewards" show. Simon says wrong. Thanks Jennifer for remembering Jennifer Holliday, the original Dreamgirl from Broadway that took " I Am Telling You I'm Not Going" to a whole other level. Beyoncé made no effort to conceal her love of the Oscars and Hollywood royalty and belted out a Dreamgirls medley with Anika Noni Rose and Hudson at the ceremony. Bad Boy Murphy has in the past dissed the Oscars for racial underrepresentation but this year, best supporting actor should have gone to him over Alan Arkin's performance in Little Miss Sunshine. Forest Whitaker, just as Degeneres foreshadowed, brought the speech audiences love to hear, the rise to fame from humble origins saga, as he chronicled his journey from Texas to Oscar night. 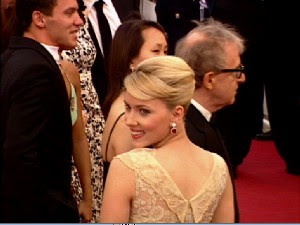 The command of Oscar is larger than the cast and crew of cinema. Which is why this may be the most glamorous awards show. But the Cannes Film Festival has to be the best festival of all and this year Steven Frears will head the jury. Cannes has glamour too (the Scottish word for enchantment, delusive allure, or compelling charm) but the critics and jury pick films for talent, ingenuity and message. The Oscars ceremony is notoriously jaded and its hard to resist the spellbound movie magic, with morning after comments on clothing, makeup and whether or not everyone's on camera red carpet comments were "scripted". The temptation was perhaps too great, but veteran Peter O'Toole despite numerous nominations and reaching the ripe old age of 74 did not get to go up to take a bow for best actor. The Oscar show, exemplifying the American theme of winners and losers, which Degeneres brought up to in her opening remarks, is all about winning AND how you play the game.
Posted by cinefemme