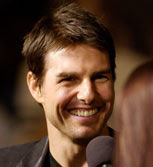 One such person was Scarlet Johansson who was proselytized by Cruise and shortly after dropped out of Mission Impossible. As converts are easily found in the blockbusters roll lists, next stop, the set of Batman to meet Katie Holmes, now wife.

"Writing for a penny a word is ridiculous. If a man really wants to make a million dollars, the best way would be to start his own religion".
L. Ron Hubbard, founder of Scientology

That's great if you got your interview with Tom after he was was squirted by water at the War of the World publicity tour two years ago. Like his films, his statements about Scientology are very much in the public domain. Like other celebrity Scientologists--do they all have bad PR agents? Perhaps just Scientologist advisors. Tom's religion may seem to have very little to do with his acting career but its one of the factors behind his success -- as he will tell you himself. And he's not above proselytizing his "religion" to "friends" and "acquaintances". Its disturbing to read how many actors and celebrities are actually associated with this cult. Makes you wonder about the dummifying entertainment produced in Hollywood and the deals being made to get on project rosters. To name just a few associated with Scientology: Kirstie Allen, Mimi Rogers, Candice Bergen, Demi Moore, Isaac Hayes, Juliette Lewis, Jenny Elfman. JohnTravolta, Rickie Martin, Kelly Preston, Ann Archer, Peggy Lipton, the late Sony Bono and William Burroughs and-- Katie Holmes.

To her credit Scarlet Johansson took a hike.
Consider the recruitment factor to Scientology with an advocate like Tom Cruise :

"Celebrities are very Special people and have a very distinctline of dissemination. They have comm[unication] lines that others donot have and many medias[sic] to get their dissemination through".
L. Ron Hubbard, from Flag Order 3323, 9 May 1973

Not only do celebrities have lines of communication, according to Scientology their utterances are divine and can potentially alter organic matter. That's pretty powerful stuff for someone like Tom Cruise:

He who can truly communicate to others is a higher being who creates new worlds.
L. Ron Hubbard

And young and old stars are buying it:

Yet, Tom's popularity has never been lower, and it would appear that the public can be divided into "Scarlets" and "Katies"(of late--mostly Scarlets):

"Tom Cruise's popularity has dropped significantly in the last few months, according to the latest Genius StarPower report. By all measures, the plunge (among 13 to 49 year-olds) is steep for a celebrity of his magnitude:

* his StarPower ranking plummeted from 12th to 50th
* he went from the 11th most liked celebrity to the 197th
* his fan base (those who like or like him a lot) shrank from 33% to 25%
* he ranks among the top 5 most controversial actors (those who are heavily disliked and liked), along with David Spade, Tom Green, Pauly Shore and Ashton Kutcher."

The drop follows Cruise's controversial publicity tour for the release of "War Of The Worlds" and his engagement to actress Katie Holmes. The above figures are from the Genius StarPower Summer 2005 report (covering the six months to July 1, 2005) and the Spring 2005 report (covering the six months to April 1, 2005). Which is great that it is waning, because maybe Cruise and company can afford to be milked for millions by Scientologist but fans without that kind of cash flow will pay heavily for their star worship. But maybe P.T. Barnum is right: " a sucker is born every minute".

The Church of Scientology uses celebrity spokesmen to endorse L. Ron Hubbard's teachings and give Scientology greater acceptability in mainstream America. As far back as 1955, Hubbard recognized the value of famous people to his fledgling, off-beat church when he inaugurated 'Project Celebrity.' According to Hubbard, Scientologists should target prominent individuals as their "quarry" and bring them back like trophies for Scientology. Celebrities are considered so important to the movement's expansion that the church created a special office to guide their careers and ensure their 'correct utilization' for Scientology. The church has a special branch that ministers to prominent individuals, providing them with first-class treatment. Its headquarters, called Celebrity Centre International, is housed in a magnificent old turreted mansion on Franklin Avenue, overlooking the Hollywood Freeway.

There was another time when Hollywood directors, screenwriters and actors "named names" which shed a dark light on the entertainment world. Scientollywood does have an effect on how we perceive "performances". Scientology first of all is not a religion, it is a belief system like the Moonies. Unlike Buddhism which is also not a religion, and which you can't even come a millienium close to comparing it with. Scientology specifically uses celebrities to spread its message to the extent that a significant number of high profile celebrities are visibly associated with the cult. With some generous financial reciprocity & networking opportunities. That's Scientollywood!

Tom Cruise is 'Hubbard and companies' most bankable and highest profile celebrity and they will tell you that themselves on their website. The market research analysis study points out that Cruise's popularity has decreased - among those involved in the study, it has nothing to to with how a celebrity it defined. It also reveals nothing about how many people nevertheless will allow their bank accounts to be emptied for star worship to be associated with the likes of Tom Cruise and some of the celebrities in the photos in op cit.

Scientologists have opened special missions for career guidance to stars like Tom Cruise - and a growing number of careerists that want to make it in Hollywood. It behoves Scientology that he does this. Knowing about Scientollywood actually has nothing to do with Tom Cruise's acting ability. There are other scales to use here. As far as 'quantifiables' , you might then want to consider why, according to the market study in op cit that Tom Cruise's popularity has decreased because of his affiliation with Scientology. What does that say about Scientology?

Not everyone wants to believe that 'body thetans' are still attached to humans from an alien invasion to earth which require holding the batons of a wizard machine daily for purification. Not to mention that for this privilege its very hard to shake proselytizers once you have begun garnishing your wages to Scientology. As far as negative publicity, would it have been better to not discuss the health risks of smoking at all?

Comparisons can indeed be made with Scientology and other cult religions who profit on people's grief, tragedy; loss of limbs or loved ones, or aspirations to make it in Hollywood. Now all that remains is to check into one of the Scientology missions in a neighborhold near you to see if the experiences of others hold any truth. If those quicky press conferences about Scientology for 'Tom Cruise interviewees' haven't got your attention what will?

But you might say, "if I'm defending Cruise's right to talk about Scientology it'd be hypocritical of me to attempt to deny your right to challenge him; I'm simply expressing my own opinion that I don't see why the whole thing is quite so offensive to people". So, kindly point to where Tom Cruise's 'right to talk about Scientology' is the issue. There is no 'offensive' or 'moral' outrage meter ticking. There are only 'body thetan' meters to purify stars like Tom Cruise and missions for new stars with Scientology advisors up and running. And less financially able converts that are in debt to Scientology that haven't had the benefit of information about what Scientology is about - just that Tom Cruise is in it so its got to be great. And conscious devotees like Katie Holmes who will give birth in silence and whose child can not be spoken to during his or her first months of life because an alien life form may be attached to it: why there is actually nothing 'offensive' here at all. Just another normal day in Scientollywood.

Cruise hasn't said so much about Scientology but received considerable negative attention when he criticized Brooke Shields' book on postpartum depression and called psychiatry a 'quack field' for treating the condition medically. Cruise, a high school graduate and Scientology's numer one guy, has never given birth to a baby. About the same time his ratings dropped. But the good news is that it brings Scientology's dubious belief system into the public domain. Therefore, Let Tom Speak. I Agree. Tom's criticism of Shields helps to illuminate Scientology's views about childbirth. His wife will not be allowed to make a sound during her delivery nor even speak to her newborn infant. Read Kelly Preston's account of how that went....Or if you prefer, medical opinions linked below.

"A Thetan [alien] assumes a baby's body usually about the time it takes its first breath".
L.Ron Hubbard

Re: proselytizing stars: Who ARE the advisors and what ARE their qualifications for 'star maintenance'? Is Tom one of the mentors? He claims he spends time on the phone 'helping people' even at 2am. Financial hooks in new converts regardless of ability to pay aside, and the rights of Tom to speak out, what about the reproductive rights of mothers--not to mention newborns ? Is anyone aware of this who admits to not knowing much about Scientology?

Ironically right about the time of Hollywood blacklisting in the 1950's L. Ron Hubbard was recruiting 'celebrities' to Scientology:

"According to Hubbard, Scientologists should target prominent individuals as their "quarry" and bring them back like trophies for Scientology. He listed the following people of that era as suitable prey: Edward R. Murrow, Marlene Dietrich, Ernest Hemingway, Howard Hughes, Greta Garbo, Walt Disney, Henry Luce, Billy Graham, Groucho Marx and others of similar stature. "If you bring one of them home you will get a small plaque as a reward," Hubbard wrote in a Scientology magazine more than three decades ago. Although the original effort faded, the idea of using celebrities to promote and defend Scientology survived and is now being expanded though Hubbard's successor David Miscavige. [Miscavige befriended Cruise in the 1980´s".

Today the advice to treat AIDS, postpartum depression, heroin addiction, and radiation poisoning with vitamins can be heard at a Scientology mission in Hollywood or near you. Where 'trophies' (beyond those already named) include: Karen Black, Linda Blair, the late Sonny Bono - who introduced Mimi Rogers, who introduced Cruise and is ex-wife), Nancy Cartwright - the voice of Bart Simpson, Lisa Marie and Priscella Presley, Chick Corea, Ernest Lehman, Geoffrey , Juliette and Lightfield Lewis. Kelly Preston and John Travolta and Paul Haggis are lifetime members ... and the list also includes lesser known screenwriters actors and professionals in Hollywood.... And so what, it probably doesn't help their careers much . One ex-member (before the murders) was Charles Manson...But mothers and newborn and those with medical emergencies are in trouble.

"Comments like those by Tom Cruise are a disservice to mothers everywhere. To suggest that I was wrong to take drugs to deal with my depression, and that instead I should have taken vitamins and exercised shows an utter lack of understanding about postpartum depression and childbirth in general".
Brooke Shields.

"Since all illness are psychosomatic in the eyes of a Scientologist, members believe that everything from indigestion to AIDS can be cured through auditing (talking through issues while attached to a biofeedback device called an "E-meter" that is similar to a lie detector) and vitamins".
Journal of Clinical Investigation.

"Scientology is the only specific (cure) for radiation (atomic bomb) burns".
Church of Scientology.