Leonardo Who ? or Symbols of the Sacred Feminine 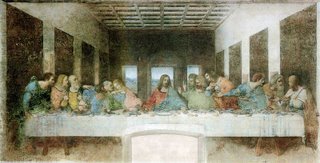 I missed the frenzy around Dan Brown's best seller last year, The Da Vinci Code recommended by a respected Zen Buddhist teacher in Sweden--before all the media frenzy. All last summer my friends spoke about it in Skala Eresssos on the island of Lesbos on my holiday for it takes up how Mary Magdelene may have been one of the disciples of Jesus . I even bought the book which awaits my scrutiny. Tonite, the film adapted from the book will open the Cannes Film Festival. I saw it several hours earlier today. I am glad I saw the film before I read the book. Because as filmmaker Maya Deren declares: if cinema is to develop its own language it must create a vocabulary of filmic images. It should reject horizontal linear development and create vertical cinematic time and space. That said, Ron Howard's The Da Vinci Code is a horizontal potboiler. There are few instances of cinematic magic. Granted there are several teams that worked on special effects , with colorful code names such as Brainstorm Digital, Double Negative, Rainmaker and The Senate. However, there is little to conjure up "sacred symbols of the feminine" even if the mystery concerns tracing theories about the history of Mary Magdelene. Howard said the theme fascinated him because he has a strong willed wife and three daughters. But this is not the theme of this film. Its an ordinary crime mystery saga, like the novel, with lots of detectives, preyed upon innocents and arch enemies.In just the opening minutes of the film I was confronted by the profundity of the following "symbols".
Further profundities

William Welbes said...
This comment has been removed by a blog administrator.
9:01 AM

Hello CineFemme and all,

Here's the key to understanding the esoterica the movie and book left undefined. In the process, you'll understand why it was left for me to explain. You may not initially agree with everything I reveal, but be a little patient with my long-winded presentation of what I have waited a very long time to be able to say. I promise to amaze and enlighten.

Here is the key to understanding what the Vatican and Papacy truly fear...

Here's a real hot potato! Eat it up, digest it, and then feed it's bones to the hungry...

There's much more to the story of the Vatican's recent machinations than meets the eye. It's not the DaVinci Code or Gospel of Judas per se, but the fact that people have now been motivated to seek out the unequivocal truth about an age of deception, exactly when they expect me to appear. These recent controversies are spurring people to reevaluate the Vatican/Papacy and the religions that Rome spawned, at the worst possible time for them.

The DaVinci Code novel and movie are no more inaccurate as literal versions of history than the New Testament. The primary sub-plot involved purposeful symbology being used to encode hidden meanings, exactly like the Bible and related texts. In other words, none of these stories represent the literal truth. This is the common and pivotal fact of all such narratives about ancient Hebrew and Christian history. Debating whether the DaVinci Code, Gnostic texts, or the Bible are accurate history is a purposeful ploy designed to hide the truth by directing your inquiry away from the heart of the matter.

There is a foolproof way to verify the truth and expose centuries-old religious deceptions. It also proves why we can no longer let the Vatican tell us what to think about ancient history or much else. It is the common thread connecting why the ancient Hebrews, Yahad/Essene, Jews, Gnostics, Cathars, Templars, Dead Sea Scrolls, DaVinci Code, and others have been targets of Rome’s ire and evil machinations. The Vatican and its secret society cohorts don’t want you to understand that the ancient Hebrew symbology in all of these texts purposely encodes and exposes the truth about them. Furthermore, the structure of ancient wisdom symbology verifiably encodes the rules to decode messages built with it. This is what they most fear you will discover.

If the Bible represented the literal truth or even accurate history, there would be no need for faith in the assertions of deceptive and duplicitous clergy and their ilk. It is undeniable the New Testament is awash with ancient Hebrew symbolism and allegory. The same is evidenced in the Old Testament, Dead Sea Scrolls, Gnostic texts, biblical apocrypha, Quran, DaVinci Code, and other related sources. All ancient religious, mystical, and wisdom texts have been shrouded in mystery for millennia for one primary reason: The ability to understand their widely evidenced symbology was lost in antiquity. How do we finally solve these ages-old mysteries? To recast an often-used political adage: It’s [the] symbology, stupid!

It is beyond amazing that the Vatican still tries to insist the Gospels are the literal truth. Every miracle purported for Jesus has multiple direct symbolic parallels in the Old Testament, Apocalypse, Dead Sea Scrolls, and other symbolic narratives and traditions. Recasting the symbolism of earlier Hebrew texts as literal events in the New Testament is one of the central deceptions associated with Christianity. This is part of the secret knowledge held by the ancient Gnostics, Templars, Cathars, and others, which is presented with dramatic effect in the DaVinci Code. None of these narratives or stories were ever intended as the literal truth. This fact is the key to unraveling many ages-old mysteries and exposing the truth about the Vatican's long-term deceptions.

Moreover, the following Washington Post article (The Book of Bart) describes how many changes and embellishments were made to New Testament texts over the centuries, unequivocally demonstrating they are not original, infallible, or truthful. When you combine proof that the New Testament Gospels are not wholly literal with proof that these texts were heavily reworked in the early years of Christianity, you are left with only one possible conclusion. The Vatican has long lied to everyone about the central tenets and history of Christianity. This revelation also proves they are not the Creator’s representatives but Her longtime opponents. The recent hoopla over the Gospel of Judas and DaVinci Code demonstrates they are still desperately trying to deceive the world and obfuscate their true nature and activities.

It's no wonder the Vatican fears the truth more than anything else. As further proof of these assertions, seek to understand the symbolic significance of my name (Seven Star Hand) and you will have proof beyond disproof that Jews, Christians, and Muslims have long been duped by the great deceivers I warned humanity about over the millennia. What then is the purpose of "faith" but to keep good people from seeking to understand the truth?

Not only do I talk the talk, I walk the walk...
Here is Wisdom!!

Revelations from the Apocalypse

The film really haunted me for a reason I cannot tell. I guess there is more about Christianity that has been hidden from us.

Shalom 13 Tevet 5772
I believe what the film and author
are really trying to say is
"WHAT IF" !
What if this where true,
or what if that where true.
The book and film made us think,
"WHAT IF"
Then you have to wonder,
what does the Church REALLY
have against this film ?
I'm a 53 yo Jewish man
and I keep wondering
what is it the Church
really has to hide ?