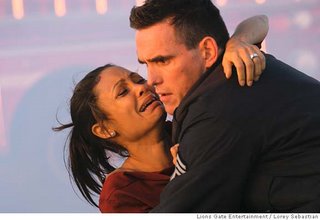 To be sure, CRASH. was the instructive movie. A preachy movie. Ang Lee said he wasn't sure why the Academy didn't like Brokeback Mountain. Probably something home grown from LA was preferable. But certainly homophobia is part of why it wasn't selected. The kind that no one will admit to, just as no one will admit to racism, or sexism. The why do you have to make a big fuss about it kind of homophobia. Why the big deal. See we've dealt with it before. We're all liberal, we work with each other everyday. That kind of 'ism'. The film that had the widest support is bullshit...its who had the most screeners, pushers and preachers. And then in the end, it comes down to your personal belief system.

But the truth is most of the films were kind of preachy this year--and everyone was selling messages: this film is about this and that, and, oh by the way I want to thank my grandmother, mother, father etc. for this. Its like that documentary from England where these school children are followed every seven years from seven to 49--it all seems so predictable. Peggy Lee's tune "is that all there is comes to mind"..... The Constant Gardener and Munich were two films skillfully made that also went home (almost) emptyhanded. What do the publicists have to say about these films. And didn't Spielberg look a bit sour.... 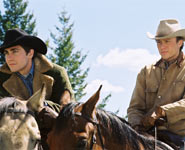 Brokeback Mountainmay not have been the best film, but it covered territory that has NOT been treated in mainstream film previously. Tacky speech by the producers of film though....for adapted screenplay. Fitting in timely with all those messages about the film. And maybe the marketers would have done well to proclaim " This is a Gay Love Story about Two Closeted Shepherds Who Married Women to Hide Their Love". 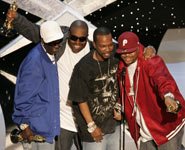 The award for original song "IT'S HARD OUT HERE FOR A PIMP" (Hustle and Flow) was a total bore. But the burning cars from CRASH and Dolly Parton's Transamerica score weren't invigorating enough for the one's voting in this category. No matter how the presenters tried to dress up that other song titles have been "unusual" this was a real low for Oscar history.

Just how original was this rap song with the same predictable format.......hello? But for the Oscars, radical. Prostitutes are made happy in Hollywood (Julia Roberts), now its time for the pimps that beat them up. And a song to glorify it. CRASH!!!!

George Clooney is Mr Oscar 2006. Best acceptance speech: Batman is dead. But is George...possibly...gay? in the year of Brokeback Mountain ....

Tsotsi seemed to be a sure thing from beginning. Now according to Jon Stewart, 3 Pack Mafia knew how to accept an award. Wrong. It was Gavin Hood. 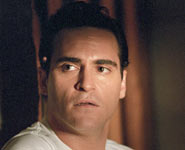 Joaquin Phoenix gave a lot more than Phillip Seymour Hoffman, far more than Reese "I'm just trying to matter" Witherspoon. Sometimes you wonder. But its a publicist bash, not an awards show. Did you see all the props paraded on stage, penguins bow ties etc.

Tribute to Robert Altman, rather swell ( Streep, Tomlin did it well). Altman's films snubbed at previous Oscar 'awards' makes you appreciate what good film can be...even a special Oscar at that....
And of course the industry is worried about downloading films and pushing the widescreen. How many times did they do that?
Posted by Moira Jean Sullivan