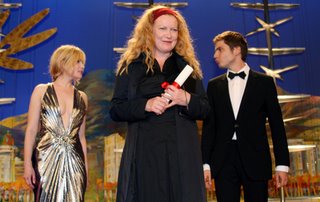 Andrea Arnold, the UK director acclaimed for her innovative Oscar winning short Wasp, won the Cannes jury over and received a special prize for The Red Road, a film about a woman who works for the Glasgow council closed circuit television and one day notices a man from her past. The Red Road is the first of three films in a dogme like conception called Advance Party. The other segments are scheduled to be directed by two other helmers -Morag McKinnon and Mikkel Norgaard who will be using the same characters and also set in Scotland. The award was announced at the closing ceremonies of the Cannes Film Festival this evening (28 May) . 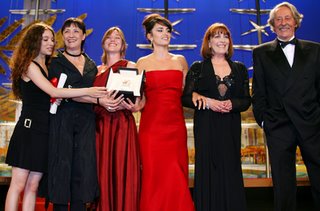 Pedro Almodovár won the best screenplay award for Volver. The Spanish director is claimed to have revitalized cinema in Spain after Franco primarily with gender benders. The ensemble cast of the film won the best actress award: Penélope Cruz, Carmen Maura, Lola Dueñas, Chus Lampreave, Yohana Cobo and Blanca Portillo, presented by French actor Jean Rochefort. Cruz said that the prize belonged to Almodovár: "Thanks for what you do for women all over the world." 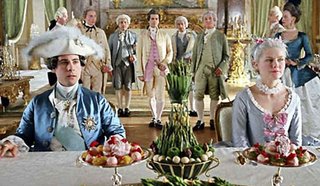 Beyond being nominated for a Palme d'Or there hasn't beeen such an innovative period piece since Stanley Kubrick's Barry Lyndon. The main criticism against the film was that Sofia Coppola left out the French Revolution. But she never said that was what her aim, nor was it her intention to show the execution of Antoinette. That exclusion may make it "petit bourgeois" for some French reviewers, but in terms of style, Marie Antoinette is a ground-breaking film with a film score that includes teen rock hits. Since its Cannes debut, according to surveys, it is the film that most viewers want to see. Sofia Coppola, a young auteur reknowned for soulful explorations of the territory of young women, was considered a top contender for an award along with Pedro Almodovár for Volver, and Alejandro González Iñárritu, for Babel, who won the best director prize. The 35- year old director also wrote the script, adapted from Lady Antonia Fraser's novel on the Austrian woman who became a French regent. As for the French cold shoulder, according to Fraser "Marie Antoinette wasn't French, and neither am I".

"I think it's a good year for women," reported Samuel L. Jackson, member of the nine-member jury.
Posted by Moira Jean Sullivan No comments: