“Film International (FINT) - Thinking Film Culture since 1973" – was originally published in Sweden (Filmhäftet. a high quality Swedish language print journal) but was adopted by Intellect Ltd. (UK) in 2003 and became an English language journal. Actually "Film International" can only claim the "Thinking Film Culture" part of their slogan from 2003, not earlier. Michael Tappert was the editor in chief of "Filmhäftet" from 1998-2002 and the new "Film International" from 2003-2004. The new format was announced at the Society for Cinema and Media Studies Conference in London in 2004 where "Intellect" was one of the exhibitors.

The mission statement of "Film International" is one and the same for all "Intellect" journals: "We wish to bridge the gap between the academy and the outside world, and encourage the participation of scholars from a variety of disciplines".  "Intellect’s" managing editor Mark Lewis, informed me that there are 22 male and 16 female editors for their various journals of academic culture in popular media. FINT currently has two male content and review editors. There are very few women writers, especially those who focus on the matrix of gender, race and class in the representation of women.

Daniel Lindvall is a Marxist and Marxism’s problematic relationship with feminism is well known. His key areas of interest are class, realism, modernism, the avant-garde, cultural politics, imperialism, and the labour movement. Gender is not on the list, nevertheless, he is aware of the right things to say about it:  "Films and culture are biased in so many other ways, in favour of the middle-class, straight, white male....". This rather vacuous comment defines his editorial practice at FINT since Liza Palmer resigned.  With Lindvall and Mertens now at the helm of FINT's content, the webzine/quarterly journal is an almost exclusively male bastion. Given the present editorial team, FINT is no longer a journal featuring significant contributions by women or about gender. It is important to continually update the status of today's film journals and webzines regarding gender representation.

In a recent editorial in FINT, Lindvall identified himself as a supporter of the gender equality program in Sweden for films screened in select theaters.  The Bechdel Test is named after the lesbian graphic novelist Alison Bechdel, where films involving two women who speak about something other than men on screen receive an “A” equality stamp.  This stamp is visible for spectators of the screened film.

According to Lindvall, Bechdel is an "easy-to-use test that very clearly reveals the gender inequality in our film culture as a whole. The fact that little has changed, in terms of numbers, when it comes to female under-representation on the screen over the last six decades, is reason enough for me to support the use of the Bechdel test as a guideline by cinemas and public funding bodies alike". But there is a caveat:  some of the films that pass the test aren't "good enough", he adds. To this kind of logic three Swedish women disagree, Anu Koivunen,Ingrid Ryberg and Laura Horak:

“Instead of rejecting the Bechdel test and the A rating as simplistic, critics should focus on the obvious. What does it mean that, in film, women can barely be imagined to have important things to say to each other? Does this have anything to do with implicit criteria of quality and taste? Why not take the challenge to push one's imagination outside the conventions that come most easily to mind? This is a call for producers, distributors, critics and audience alike”. The Guardian, Aug 27, 2013.


The real issue of the underrepresentation of women is a core issue today so the patronizing rhetoric of an armchair feminist such as Lindvall is counterproductive. At a Cannes Film Festival women in film seminar (2015) it was announced that the Bechdel test is now being use by many countries. Cannes gets very skirmish about this but basically does very little to change this. Since FINT has virtually no women writing in film any more or has a particular gender focus, the webzine does not pass the Bechdel test either Merten's content choices favor articles about male directors, by male writers. (See below for recent list).

Mertens does not acknowledge how demographics marginalize women writers at FINT.  Both Mertens and Lindvall represent a paradigm shift in the quality of the journal since 2013 regarding the representation of women. The new FINT online site and journal can be more appropriately called  "Film Culture since 2013 not 1973. Lindvall claims Mertens is "a much better writer and editor than most experienced and educated writers and editors with PhDs twice his age". (Mertens received his BA in Film Studies from University of North Carolina in 2012).

Is FINT oblivious is to its own middle class, straight, white male bias?  When given the opportunity to address gender inequality, Lindvall ignores the under representation of women working in the male dominated world of film and film criticism.

Intellect's Mark Lewis, like Lindvall, supports a relatively inexperienced editor while claiming that "Intellect" takes gender discrimination questions “seriously’. We know how hard it is to prove gender inequality even when under representation is so glaringly apparent, but it is clear from recent correspondence with FINT, that men support men - from writers, to editors, to publishers.

I wrote 17 articles for FINT online last year, all published by Mertens. Twelve of the articles were 'Cannes dailies', as well as four articles from the Venice Film Festival. This was probably one of the first times FINT did a daily Cannes chronicle and Mertens was excited about it.  One of my articles, accepted by Palmer , was never published in the FINT print journal; Mertens claimed it "fell through the cracks". This year, two online articles from the Cannes Film Festival were accepted and not published.  He claimed it was too much work for him but the reviews were about the sexism at Cannes and because of that , he wrote, "the question then becomes whether this is the right fit for your work". It has been for as long as Liza Palmer was editor but not since the webzine continues to feature a predominately male gaze.

I am member of FIPRESCI and the Swedish Film Critics Association and accredited film critic, such as at Cannes. I was a member of the Cannes Queer Palm Jury (2012) with Julie Gayet as president. An article on that experience was published by FINT under Liza Palmer.  Other articles were published by Liza Palmer when the journal exemplified diversity. 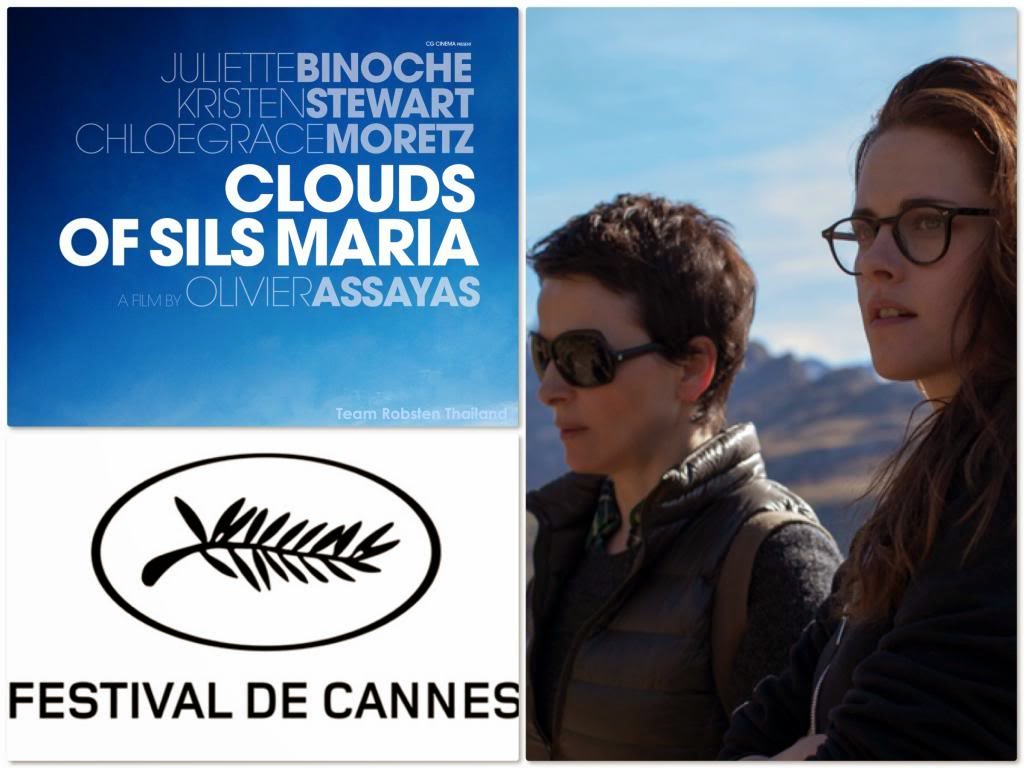 The articles about sexism at the Cannes Film Festival and a focus on the contributions of women were excluded by Mertens. With Jane Campion at the helm this could at last be taken seriously. A review of Olivier Assayas’ film “Clouds of Sils Maria” (France 2014) , a complex meta-lesbian feature, was also rejected.  Both were immediately published by Agnès Film.

Cannes seems able to justify that less than 10% for the official selection and only 20% of the films in other divisions are made by women. The organizers claim they take in "good films", not films based on gender. What then explains the invisibility or under representation of women at Cannes? Or that women make up less than 10% of the writers at FINT?  When men are threatened by challenges to their bias, they can always claim women are not good enough. As long as this practice continues, it is important to bring it out in the open.

FINT - MOST RECENT ARTICLES SINCE MAY 2013: (two articles written by women; Articles in red about male directors  - 'Merten's male gaze'. Seven of the 23 films on this list were reviewed by Paul Risker. Mertens claims that he wants a spectrum of topics and writers, a hodge podge of information. The feel of FINT nowadays conveys this recipe -- all except the 30% written by Risker.

Here is a list of the top 5 online articles, all written by men for "Film International":

The 2015 San Francisco International Festival Report
By  Mark  James.
The Agony of Woman in Gett: The Trial of Viviane Amsalem
By Christopher Sharrett.
Steve Hoover and Danny Yourd on Crocodile Gennadiy: A Tribeca Interview
A Place in Myth: Portia Doubleday on After the Ball (2015)
By Paul Riser
Nothing Lost in Times Regained: On the Restored Apu Trilogy
By Paul Riser

Naked for Lunch: Alex Radivojević interviewed
by Rajko Radović
Redefining the Self: The Human Centipedeand physical spectatorship
by Laura Wilson
Family, Gang and Ethnicity in Italian-themed Hollywood Gangster Films
by Silvia Dibeltulo
A New World Is Coming: Visiting with Godfrey Reggio
by John Malkin
A Queer Reading of Nuevo Cine Mexicano
by Oscar A. Pérez
Turning Japanese: From Sideways to Saidoweizu: An examination of a Japanese remake of a Hollywood film
by Jeffrey L. Griffin
Like a Mirror Walking Alongside a Road: An interview with Volker Schlöndorff
by John Duncan Talbird
A Rebel Rides Again: An interview with Monte Hellman on The Shooting (1966) and Ride in the Whirlwind (1966)
by Matthew Sorrento
Tarkovsky’s Nostalghia: A conversation with Nathan Dunne
by Noah Charney
Life Regained: An interview with Michael Rossato-Bennett on Alive Inside(2014)
by David A. Ellis
Review: The Fictions of Finance in David Cronenberg’s Cosmopolis
by James Slaymaker
Criterion Core: The Sound of Silence (Safety Last!, City Lights, Master of the House)
by Brandon Konecny
Around the Circuit: Toronto International Film Festival
by Barry Keith Grant
Parting Words: The Problem with Perfection
by Jacob Mertens
Posted by Moira Jean Sullivan No comments: