Tieing the Knot in San Francisco after 55 years, Del Martin and Phyllis Lyon 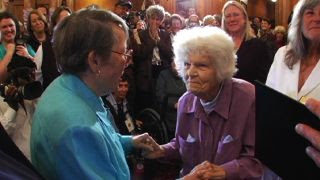 "On June 16, 2008 lesbian rights pioneers Del Martin and Phyllis Lyon were married in the first same-sex marriage ceremony since the California Supreme Court ruled in May that it was unconstitutional for the state to deny the right to marry to gay or lesbian couples".

This video of the wedding by Academy Award winning documentary filmmaker Debra Chasnoff shows the ceremony officiating by San Francisco Mayor Gavin Newsom. Phyllis Lyon died only months after the wedding.
“Registered partnership” - not marriage - has been legal in Sweden since 1995 and exists in several countries today. The clinical phrasing makes it easy to create and dissolve partnerships, like registering a business. The first partnerships were often created as expressions of political victory – a milestone for so-called “equal protection under the law”, but which does not come close to the meaning of honor and commitment in marriage. This was a hard earned victory in California shot down in 2004 and which still risks extinction on the ballot in November 2008. Massachusetts paved the way in the USA to make it happen. Hopefully one day it will become Federal law and we can sponsor our partners wherever they reside. There are seven “nations” in the world today that acknowledge marriage including Massachusetts and California. The right to marry should be a fundamental right and certainly is embodied in what is meant by “life, liberty and the pursuit of happiness” in the Declaration of Independence. Neither of the Presidential candidates sanction marriage. Nor did Hillary (or Bill) Clinton. Certainly Del Martin and Phyllis Lyon showed the world love and endurance for 55 years. And as more “nations” legalize marriage let these two women’s love be a shining beacon. San Francisco Mayor Gavin Newsom is one of the most courageous and forward thinking politicians we have today. The words he read for Del and Phyllis about marriage express that it is something that should be carefully considered. For sure this is what these two lesbian pioneers did and they waited over two generations for the right to legally marry.
Posted by Moira Jean Sullivan No comments: