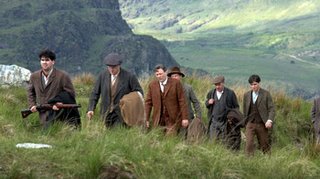 The Wind That Shakes the Barley, Ken Loach Palme d'Or.
This year the Palme d'or winner film is about the Irish struggle for independence led by the IRA against the British Black and Tan soldiers. The story is set in the early 1920s. According to Loach upon accepting his award, the film deals with "the British confronting their imperialist history". It can also be seen as an allegory for the current situation in Iraq. The Cannes selection skillfully blends art with politics and the awards are known for profiling superior films that reveal the complexities of today's issues on screen. Loach is one of Europe's leading auteurs and the award was well deserved. His films are frequently selected to Cannes, and the jury decision to award the film the Palme d'Or was unanimous since the first time they saw the film early in the week.

According to Helena Bonham Carter: " Ken Loach's film came very early on and that absolutely shattered and broke, so intense and viscerally moving. There's no explaining it; it hit us all profoundly. It was one of five films about war. It was not only a fantastic education about the Irish problem, but it also was emotionally for me because I could understand something that I thought I could never understand. It led me to believe how somebody could kill his own brother. For me, it had tremendous humanity. I can't explain our mass reaction; we were just all profoundly moved." 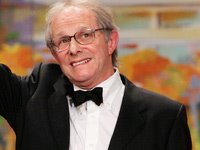 Patrice Leconte agreed: "When I saw Ken Loach's film the first day, it filled me with enormous emotion that has never left me. And when we'd see other films day after day, we talked together about what we had felt. In a corner of our hearts, The Wind That Shakes the Barley remained there, as strong as ever. That is why, this morning, in the space of a very short time, this film was unanimously chosen to be the Palme d'Or."

Or ask Tim Roth : "I discovered from Ken's movie on that I am a complete weeper. I just cried a lot in these movies. Normally, when I'm acting in films, they blow stuff in my eyes and I cry. These films really took me and took my heart."

Although the film may be a surprise to some of the critics, notably those which have issues with the social realist that Ken Loach is, or those just flabbergasted that they hadn't counted in this film as a strong contender, rest assured that the jury wanted this film from the beginning, and it wasn't a lifetime achievement award.