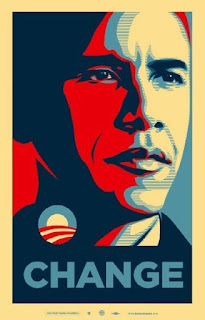 San Francisco, November 5th 2008
Its an incredible win for Barack Obama, no, incredible is not the word. Its credible. This victory shows that the old paradigm has shifted because we have evolved. The limited blue state, red state argot created out of the aftermath of the last eight year administration is soon to become obsolete just as other significations seem to have marched on. Remember when a red state was a Marxist state?
The color scheme this time seems to be a purple united states. At least that is how Obama envisions it. His victory speech on election night has to be one of the most powerful he has made to date, and of any politician of recent time for that matter, revealing so much more of his core. Obama is also a writer. Nobel prize recipient Toni Morrison points that out. He writes his own speeches and is not dependent on ghost writers. Clearly he won't be needing them for his inaugural address either. I recall the last inauguration that I watched in transit at Logan Airport in Boston. I was excited about a new time that promised a different kind of change. Poet laureate Dr Maya Angelou afterwards called Bill Clinton the first "black" president. Barack Obama is the real first. But he is far more than that. His refreshing ideas are what make him stand out more than anything, as well as his cool and refusal to stoop to manipulation and bating. He also picks his own staff and his running mate. He doesn't have to stiff it to anyone like the McCain camp who is already hanging out Governor Palin. As if to say that if McCain lost it was because of a woman. Obama shows every sign, so far, of making his own decisions and being comfortable in the driver's seat. 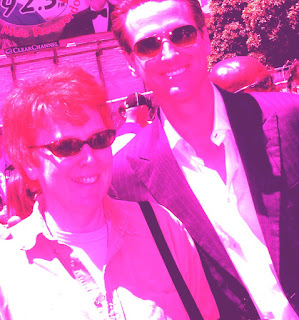 But now we come to another issue on election day that did not go so well. California Proposition 8, a deftly worded bigoted Mormon funded proposal to ban gay marriage passed by a small majority (5000 votes). One of the most expensive campaigns on a single issue in US history. How can it be, and of course the answer is inherent in the question, that we can embrace change on so much but not on the subject of marriage rights for lesbians and gays? The time has not come? What comparisons can we make here? Repealing Roe/Wade is not going to happen in this presidency, but perhaps gay marriage will not either. Civil rights for all is the paradigm waiting to shift, and perhaps San Francisco Mayor Gavin Newsom is the person that will make that happen as he steps into the national arena. Could he be the "first gay mayor" for making it known that this was a real election day defeat in a blue state that is far from the color purple.
Posted by Moira Jean Sullivan No comments: