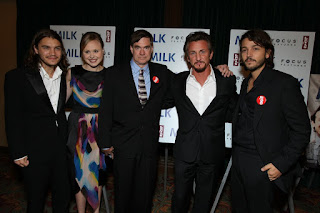 If Gus Van Sant's new film Milk about the late Harvey Milk had been released before November 4th maybe it might have made a difference towards defeating Proposition 8 which takes away the rights of gays and lesbians to marry in California. Certainly in his lifetime, the late gay supervisor successfully rallied against the Proposition 8 of that time, the Briggs Initiative - Proposition 5 - which would have taken away the rights of lesbians and gays to teach in schools and ANYONE who supported them. This was the time when ex beauty queen Anita Bryant worked to get such an ordinance passed in Dade County Florida. Harvey Milk believed that if you didn’t register to vote you were giving away your rights and he pounded that home at the Civic Center during Gay pride 1978 a high point of the film. I heard Milk and registered for the 1st time after his powerful speech.
Gus Van Sant has done an excellent job of making a completely well crafted movie about the life and times of Harvey Milk who was assassinated along with Mayor George Moscone in San Francisco on November 27th 1978 - and tomorrow it will be exactly 30 years since Dan White, an ex fireman executed these two men in their offices under the influence of Twinkies. The film premiered earlier last month in San Francisco on October 28th and all the actors were on hand with Gus Van Sant to usher in the film at the Castro Theater.
Sean Penn plays Harvey Milk and he is totally convincing in every scene in representing this wonderful and enthusiastic supervisor who knew about people and their needs and how to successfully implement policy by building grass root connections. Harvey Milk energized the gay community and helped make the Castro a booming mecca for gay men. Though lesbians preferred to hang out in the East Bay or in the Mission, according to activist San Francisco educator Sally Gearheart Milk was concerned that lesbians were represented in every issue and brought in Anne Kronenberg ( Alison Pill) to run his campaign. Its hard to not fall in love all over again with Milk and thanks to the efforts of Sean Penn he is made real down to his truly humble happy and hard working persona. Josh Brolin plays Dan White brilliantly, a homicidal man Milk believed was a troubled latent homosexual. Despite his childish excesses Harvey Milk continued to fraternize with White even seconds before he was shot. Less successful in the film is Diego Luna as Milk’s lover Jack Lira. In real life though he was caught up with helping distressed men his long-term relationship with Scott Smith (James Franco) endured even after they went separate ways.
The film is not only the story of Harvey Milk but the galvanization of the gay community in San Francisco and while Milk would have been quick to point out that there are very few lesbians in this film – something that Van Sant seems to miss - he would have been happy to know that things changed during his life for the better. It is not always easy to make an historical film that rings true to life but Milk is one of those films that seems to get it mostly right.