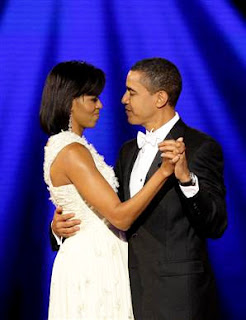 Finally, an inauguration worthy of watching, finally inaugural balls worthy of watching, finally a presidency that commands respect. Finally an African American in the White House. This moment, this dance, this president is the strongest, most dignified and most gifted leader we have had in a long time - and alongside every powerful man, is a powerful woman, and now we have both. A thinking man and a thinking woman. We have waited a long time, for this moment , this dance! But remember Obama is not a messiah and it will take a long time to undue the wreckage of Bush Jr.
For we know that our patchwork heritage is a strength, not a weakness. We are a nation of Christians and Muslims, Jews and Hindus — and non-believers. We are shaped by every language and culture, drawn from every end of this Earth; and because we have tasted the bitter swill of civil war and segregation, and emerged from that dark chapter stronger and more united, we cannot help but believe that the old hatreds shall someday pass; that the lines of tribe shall soon dissolve; that as the world grows smaller, our common humanity shall reveal itself; and that America must play its role in ushering in a new era of peace.
Barack Obama, January 20, 2009.
Posted by Moira Jean Sullivan No comments: