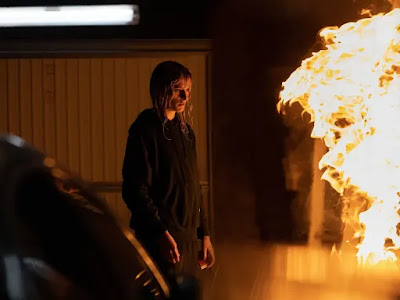 The fact that there were four women on the feature film jury at Cannes this year means a lot. Even if 20 of the 24 of the films were made by men in the competition for the 74th Cannes Film Festival, how women see film and make film is different than men. The world of film critics is full of men and how they write is also different. It is not a judgement - just a fact.

I was deeply disturbed by Titane at the screening. Filmmaker Julia Ducournau is as "raw", as the title of her previous film (Raw, 2016). The cadence of this film is similar starring Garance Marillier as a vegetarian veterinarian with a minor role in the film. Ducournau has a cinematic sense that I have not encountered previously This needs some qualification. Ducournau shows how women feel. She shows their bodies in intimate detail and their facial expressions. They are doers. She shows their vulnerability and their stengths even as they are assaulted and bullied. She provides characters in which spectators can focus their "Look", not the camera but the characters who gaze on women in a sexual way, for 'the look' is the gaze of the camera, the gaze of the characters on each other and the gaze of the spectator. Because it is made by a woman she knows how to visualize female characters, not through surface reality, window dressing or mirrors of the male gaze but how they feel inside. The scenes are visceral and cathartic. Her previous films Junior and Raw show physical metamorphoses and transformations acquired through ingestion, digestion and sexuality.

Titane , like Raw begins with a crash crash. A narcissistic uncaring father (Bertrand Bonello) screams at his seven year old daughter Alexia (Adèle Guigue) in the back seat to be quiet and seconds later the car hits a barricade which sends her, not him, to the emergency room. As she sits up in bed, her head is covered with a metal vise that is clamped to keep her head erect. When she leaves the hospital after rehabilitation we see the close up on a scar that looks like brain tissue. She has received an metal implant to suture the wound. It remains and hair cannot cover it.

The opening scenes shows sex workers feeding the fantasy of men by performing erotic dances on top of revved up sedans in a car show . The men desire them but after the exhibitions, Alexia turns it off. One pursuer asks for an autograph, then a kiss, and in response, she plummets him in the head with a long black metal speke. Leaning over the window he exudes white foam from his mouth. Later that night there is a loud pounding at her door and she opens it, It leads to a garage, where revved up sedan is waiting for her , entraps her with seatbelts and has sex with her. She becomes pregnant but after an examination, her father, a physician, claims she is not.

In the dressing room Alexia is drawn to Justine (Garance Marillier) and follows her home where she lives in a collective of sex workers. After a failed sexual encounter she proceeds to attack Justine her weaponized hair pin and attacks her housemate except an MTF. Next up in her warpath is her father who goes up in flames. Alexia's mug shot is described to the police and is on the news that is scene in public monitors. To cover her tracks, she shaves her heads and binds her chest in a service stop lavoratory. Alexia becomes Adrien. The names are used for the main characters in Raw.

Central to both films are rituals involving contests of feats. In Raw it is for the induction of new students into vet school. In Titane it is for the ordeals of firemen. Titane is flame resistant film art.