Whitney Houston, we will embrace your divinity, always. 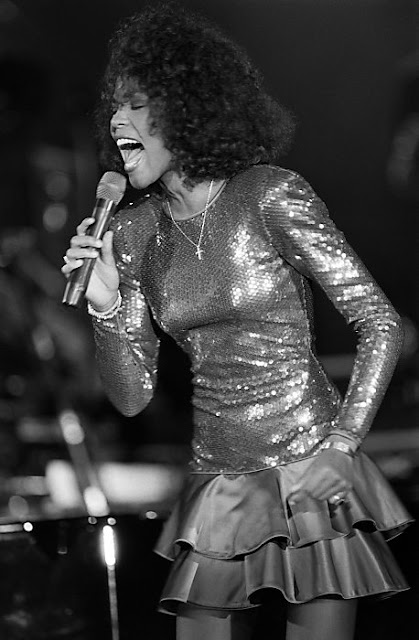 This photograph accompanied an article which appeared in the San Francisco Chronicle yesterday on Valentine's Day, February 14:

Whitney Houston: Her burden was also ours.

This article made me better understand a woman's comments today. She said she didn't want to listen to Whitney Houston because she was an addict, and didn't live the themes of her songs and made so much money off of them. She had actually never heard that addiction is an illness.  This belief is still widespread and has re-surfaced with Houston's death.

Houston's later financial difficulties despite all her successes was in part due to that she only had "artist" royalties for radio spins and albums. The lion's share went to Sony and the songwriters. She didn't write the majority of her hits, she sang them.* However, she clearly had assets in the millions. The music mogul who brought the young Houston to prominence was Clive Davis. She was in Hollywood to attend his pre-Grammy party at the hotel where she died. Twenty four hours after her death 61,000 albums of her "Greatest Hits" were sold.  Davis helped support her at the end of her life, and it was only right, as she made him millions of dollars.

The phenomenal vocalist was groomed for a role that she couldn't live up to in the long run, or rather chose not to. It was an image that she rejected that many still wanted her to have. We did not want the new one, the one with Bobby Brown, the reality TV shows, the erratic behavior, the using.


Addiction is an illness

Whitney Houston's early year achievements and performances from the 80's through the 90's commanded national media attention. Drug and alcohol abuse put her health in a downward spiral in the new millennium. This event gathered equally copious vigilance .

"The ride was not worth the fall".

Many surrounding Whitney Houston "enabled" her -  kept her ill by not properly understanding what it means to be clean and sober (no substances, including alcohol). These actions included prescribing addictive substances, engaging her too quickly in the demanding work of an entertainer when she needed time to recover, inviting her to parties where alcohol was served and offering her drinks.  Recovery from addiction is not about "almost having it all", it's about having it all, with conscientious help.

It is our burden as we watched helplessly, expecting her to get miraculously better on her own, and looking down on her, because she didn't have the "will power" to recover on her own. Reflecting an attitude that even the ancient Greeks understood: that substance abuse is an illness that changes a person, causing them to lose their divinity.

No one can or should recover, alone.


Whitney Houston, we will embrace your divinity, always.

This is to the point. No fluff just fact. We always seem to want to hear about celebrities who have this disease. Makes them appear more human I suppose. Many of us and especially our loved ones do NOT really "get the disease part of it". I had a conversation with someone who said, "Cancer is a disease alcohol and drug abuse is not". We still as a society turn our backs on this disease and scold and deny facts about the future of the disease which ultimately leads to death for many who could live much longer and fuller lives. Sadly, Whitney, Michael and Amy are perfect examples of a short life not well lived.